As a huge fan of the ellipsis, I can’t understand why no-one suggested those three tantalizingly forward-thinking dots, instead of the “full stop”…  And surely if the slogan represents an imperative (despite forward not being a verb), an exclamation mark would have served a better purpose.

But periods aside, why didn’t Obama stick his neck out and choose forwards, instead of forward? According to the OED: “The present distinction in usage between forward and forwards is that the latter expresses a definite direction viewed in contrast with other directions. In some contexts either form may be used without perceptible difference of meaning; the following are examples in which only one of them can now be used: ‘The ratchet-wheel can move only forwards’; ‘the right side of the paper has the maker’s name reading forwards’; ‘if you move at all it must be forwards’; ‘my companion has gone forward’; ‘to bring a matter forward’; ‘from this time forward’. The usage of earlier periods, and of modern dialects, varies greatly from that of mod. standard English. In U.S. forward is now generally used, to the exclusion of forwards, which was stigmatized by Webster (1832) as ‘a corruption’.

Forwards unambiguously denotes direction, in a way that forward doesn’t. But who wants a whiff of corruption in their campaign slogan?

I’ve never noticed the period after the  The Wall Street Journal. on its masthead. How quaint.

From Both Sides of the Aisle, a Question: Is Ending It With a Period Weird?

The. Obama. Campaign. Slogan. Is. Causing. Grammarians. Whiplash. Even for some in the president’s orbit, the final punctuation on ‘Forward.’ slams the brakes on a word supposed to convey momentum. 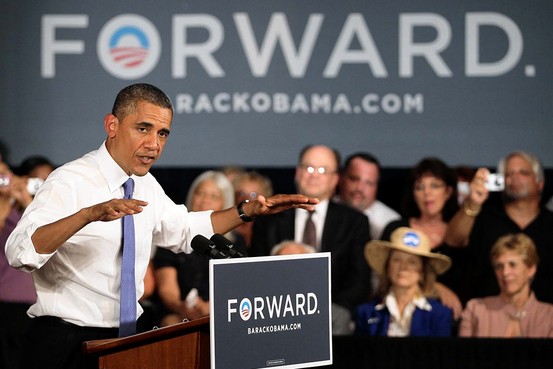 “Forward.” is the culprit. It was chosen to reflect the direction Mr. Obama promises to take the country if re-elected. It also is designed to implicitly convey the opposite: that likely Republican nominee Mitt Romney would set the nation in reverse.

Simple enough. Except the moment seven characters became eight, things got complicated. Period. Even for some in the president’s orbit, the added punctuation slams the brakes on a word supposed to convey momentum.

“It’s like ‘forward, now stop,’ ” said Austan Goolsbee, the former chairman of the National Economic Council who still advises the Obama campaign. He added, “It could be worse. It could be ‘Forward’ comma,” which would make it raise the question: “and now what?”

The president signed off on his own slogan, but evidently isn’t sold. “Forward! Period. Full stop,” he has joked to his campaign staff, according to an Obama adviser.

On that, if on nothing else, Mr. Obama has bipartisan support.

The period was a subject of a spirited debate as Mr. Obama’s senior advisers and outside consultants spent hours in a conference room at their Chicago campaign headquarters deliberating over the perfect slogan, according to an adviser who was in attendance.

Does a period add emphasis? Yes! Does it undermine the sense of the word? Maybe!

David Axelrod, the president’s longtime messaging guru, is a champion of the period. “There’s some finality to it,” Mr. Axelrod said. For those who think it stops “forward” in its tracks, he has a suggestion: “Tell them just to put two more dots on it, and it’ll seem like it keeps on going.”

The period debate hasn’t been confined to the upper echelons of the Obama campaign. Politicians, grammarians and designers who brand people and products have noticed it, too.

“There’s been some speculation that the period really gives the feeling of something ending rather than beginning,” said Catherine Pages, an art director in Washington, D.C.

In 1992, George H.W. Bush’s line, “Who do you trust?” generated chatter about the use of “who” versus “whom.” Dwight Eisenhower’s 1952 slogan “I like Ike” is clearly a sentence, but didn’t include a period. George W. Bush’s “Yes, America Can” slogan included a comma; Mr. Obama’s “Yes We Can” chant four years later did not.

Meanwhile, the title of the super PAC supporting Mr. Romney, “Restore Our Future,” seems to bend the rules of space and time, if not grammar.

Those who brandish red pens for a living are divided on whether Mr. Obama’s campaign slogan passes muster.

“It would be quite a stretch to say it’s grammatically correct,” said Mignon Fogarty, author of “Grammar Girl’s 101 Troublesome Words You’ll Master in No Time.” “You could say it’s short for ‘we’re moving forward.’ But really it’s not a sentence.”

The only single words that properly end with a period are verbs, Ms. Fogarty added, or interjections such as “wow.”

George Lakoff, a linguistics professor at University of California Berkeley who is well-known in Democratic circles, has a different verdict. He says that the slogan respects the period’s proper use because “Forward.” is an imperative sentence.

“You can look at the period as adding a sense of finality, making a strong statement: Forward. Period. And no more,” Mr. Lakoff said. “Whether that’s effective is another question.”

Joining the Obama campaign is the alternative rock band fun., which added a period on forming in 2008. In a written statement, two of the group’s founders, Jack Antonoff and Andrew Dost, described the punctuation as “our way of sedating the word fun. We love how quick and sharp ‘fun’ is, but in no way do we intend to give people the impression that we’re going to walk into rooms doing back flips.”

On its page-one nameplate and elsewhere, The Wall Street Journal maintains its period, a holdover from the 1800s. No one at the paper knows why the Journal kept it when other papers gradually dropped their traditional periods, a spokeswoman said.

In presidential campaigns, discussions over slogans often focus on pre-emptive damage control. “We’d sit around the conference rooms and have these discussions,” said Steve Hildebrand, a deputy campaign manager for Mr. Obama’s 2008 campaign. “You wonder if they’re going to catch on; you wonder if people are going to make fun of them.”

Shortly after the 2012 line was unveiled in April, late-night talk show host Jay Leno said, “That’s a good message for Obama. He’s telling voters, whatever you do don’t look back at all those promises I made. Just look forward.”

Mr. Romney has called the “Forward.” slogan “absurd,” and has seized on it to argue Mr. Obama’s policies would take the country “forward over a cliff.”

Mr. Romney’s slogan, “Believe in America” (no period), has its share of critics as well. “I think that’s about as close to a standard slogan as you can possibly get,” said Fred Davis, a Republican media consultant.

Rep. Steve Israel of New York, chairman of the Democratic Congressional Campaign Committee and a former public-relations manager, said he prefers the period over an exclamation point or nothing at all.

“Forward without a period leaves open the question: ‘In what direction?’ ” Mr. Israel said. “But that’s just the old, frustrated, former public-relations executive in me.”

It is possible the president isn’t the best judge of his own marketing. During his successful 2008 run, Mr. Obama told his campaign staff he wasn’t sold on the slogan “Change We Can Believe In,” according to a book written by close aide David Plouffe.

The period has mysteriously been dropped in several recent Obama campaign ads. Obama campaign spokesman Ben LaBolt said there is no particular reason behind the omission. “Stay on your toes—anything could happen,” he said. “Do not be surprised if we introduce a semicolon.”