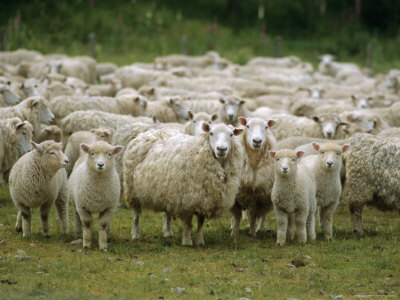 The answer to my previous post, “A singular quiz”, is that they’re all collective nouns, or nouns of multitude, and specifically terms of venery.

We’re familiar with the phrases “a flock of sheep” and “a pride of lions”, and similar collective nouns specific to certain groups or types of people, such as a “company of actors”, a “troupe of dancers”, a “class of students”, a “platoon of soldiers”, an “orchestra of musicians”, and even a “bevy of beauties”. The terms of venery — such words that refer to animals — can be especially poetic and descriptive, and below is Wikipedia’s explanation for their fascinating collective history and etymology (along with a list of my personal and most poetic favorites, which is by no means exhaustive). Also below is a list of my favorite flavory collective nouns used to describe certain professions or subsets of society, two of which need to be singled out for special attention: a “conjunction of grammarians” and a “shrivel of critics”. Whoever dreamed up those particular terms of venery must be the very epitome of style and wit. As a matter of fact, we do know the author of at least one of them, as explained in the next paragraph. It’s noted in Wiki’s explanation that these terms, even when they were first coined, never really had any practical application: they were “intended as a mark of erudition of the gentlemen able to use them correctly rather than for practical communication.” How lucky for all writers and poets (and even for us readers) that they persist in our lexicon today — some of them surprisingly so. The fact that a “gaggle” is still used to describe not just a flock of geese but also a collection of women (usually of the giggling or talkative kind) is interesting in these days of post-feminism and political correctness; this term was one of the many deliberately humorous words listed in the Book of Saint Albans, published in 1486.

James Lipton, best known to us as the creator and host of the American TV show Inside the Actors Studio, is — among many other things — a great lover of words. (Indeed, one of his favorite moments of his show — and definitely one of mine — is when he asks his actor subjects for mostly single-word answers to his questionnaire: favorite curse word? favorite and least favorite sounds? etc.) Lipton has a special interest in collective nouns, and he has published a definitive, best-selling book on the subject: An Exaltation of Larks (1968). Lipton has even invented some of his own nouns of multitude, including a “score of bachelors”, an “unction of undertakers”, a “shrivel of critics” (it had to come from an actor or some kind of performing artist), and a “queue of actors”.

Let’s not bore ourselves here (except to single out the lovely expression “a singular of boars”) with the questions and complexities of which verb forms (singular or plural) should be used with these collective nouns. Suffice to say the Brits and the Yanks diverge in their usage: in British English, collective nouns can take either singular or plural verb forms, depending on the context and something called the “implied metonymic shift”. It is perfectly acceptable in England to say “the class have finished their homework” (especially if all the students in the class had the same homework). However, in American English, collective nouns take singular verb forms: “the class has finished its homework”. This matter was discussed in an earlier Glossophilia blog post: https://glossophilia.org/?p=156

Some of my favorite nouns of assembly (for professions or groups of people):

Wikipedia on the history of nouns of assembly:

The tradition of using “terms of venery” or “nouns of assembly” — collective nouns that are specific to certain kinds of animals — stems from an English hunting tradition of the late Middle Ages. The fashion of a consciously developed hunting language came to England from France. It is marked by an extensive proliferation of specialist vocabulary, applying different names to the same feature in different animals. These elements can be shown to have already been part of French and English hunting terminology by the beginning of the 14th century. In the course of the 14th century, it became a courtly fashion to extend the vocabulary, and by the 15th century, this tendency had reached exaggerated proportions. The Venerie of Twiti (early 14th century) distinguished three types of droppings of animals, and three different terms for herds of animals. Gaston Phoebus (14th c.) had five terms for droppings of animals, which were extended to seven in the Master of the Game (early 15th century). The focus on collective terms for groups of animals emerges in the later 15th century. Thus, a list of collective nouns in Egerton MS 1995, dated to ca. 1452 under the heading of termis of venery &c. extends to 70 items, and the list in the Book of Saint Albans (1486) runs to 165 items, many of which, even though introduced by the compaynys of beestys and fowlys, do not relate to venery but to human groups and professions and are clearly humorous. (a Doctryne of doctoris, a Sentence of Juges, a Fightyng of beggers, an uncredibilite of Cocoldis, a Melody of harpers, a Gagle of women, a Disworship of Scottis etc.)

The Book of Saint Albans became very popular during the 16th century and was reprinted frequently. Gervase Markham edited and commented on the list in his The Gentleman’s Academic in 1595. The book’s popularity had the effect of perpetuating many of these terms as part of the Standard English lexicon, even though they have long ceased to have any practical application. Even in their original context of medieval venery, the terms were of the nature of kennings, intended as a mark of erudition of the gentlemen able to use them correctly rather than for practical communication.The popularity of these terms in the early modern and modern period has resulted in the addition of numerous light-hearted, humorous or “facetious” collective nouns.

4 thoughts on “A flock of nouns of multitude”