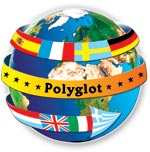 It’s not at all unusual to be bilingual. Most of us monoglots know at least one person who knows, speaks and even thinks in more than one language; dyoglots and triaglots (those who speak two and three languages respectively) are common enough to have their own names, and those who speak four languages or more are generally known as polyglots. There are actually adjectives to describe those who speak a certain number of languages all the way up to ten;  each has a Latin number prefix:

But the descriptors seem to end there. Does this mean that humans are incapable of being fluent in more than ten languages? Or simply that such fortunate multi-linguals are too few and far between to deserve their own adjectives? Is it possible to know more languages than we can count on our fingers? Is there a limit to how many languages we can master?

mental_floss explores these questions in an article published today …

How Many Languages is it Possible to Know?

There are millions of people, even in the mostly monolingual US, who speak more than one language at home. Competence in three languages is not unusual, and we’ve all heard stories of grandmas and grandpas who had to master four or five languages on their way from the old country to the new. In India it is common for people to go about their business every day using five or six different languages. But what about 10, 20, 30, 100 languages? What’s the upper limit on the number of languages a person can know?

Find out and read more at mental_floss: http://mentalfloss.com/article/49138/how-many-languages-it-possible-know#sthash.hKE7q7q8.dpuf

7 thoughts on “How many languages can a polyglot speak?”