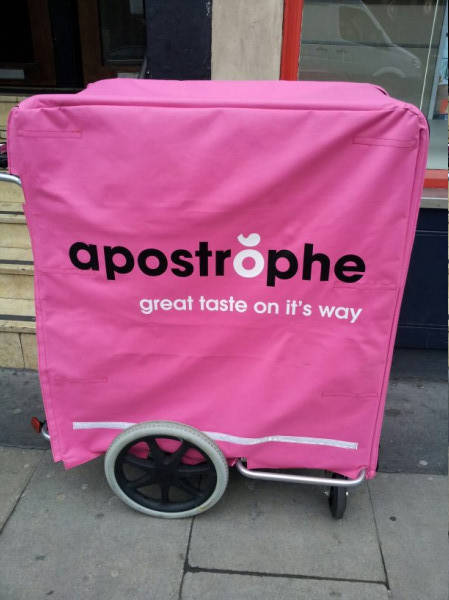 Here’s a round-up of apostrophe news and celebrations on its auspicious day. (This particular awareness day was conceived last year by The Guardian‘s production editor, David Marsh.)

“To those who care about punctuation, a sentence such as “Thank God its Friday” (without the apostrophe) rouses feelings not only of despair but of violence. The confusion of the possessive “its” (no apostrophe) with the contractive “it’s” (with apostrophe) is an unequivocal signal of illiteracy and sets off a Pavlovian “kill” response in the average sticker.” — Lynne Truss, Eats, Shoots & Leaves

The Oatmeal reminds us how to use it

The Guardian publishes a cartoon by its late, great David Austin

The Independent publishes an apostrophe quiz

Macmillan Dictionary looks back at a notable apostrophe obituary from 2012

There’s Apostrophe Abuse: a web site devoted entirely to just that. And another one for Apostrophe Catastrophes. But have no fear, apostrophe-lovers: the Apostrophe Protection Society has your back.

There again, not everyone loves the apostrophe — even when it’s used correctly. As Peter Harvey says on his blog, Lavengro: “Apostrophes in English are a menace and should be abolished.

“I’d rather fiddle with my phone for precious seconds than neglect an apostrophe; I’d rather insert a word laboriously keyed out than resort to predictive texting for a – acceptable to some – synonym.” — Will Self

And finally, a quote from the master himself:

“You find not the apostrophas, and so miss the accent.”
— Shakespeare, Love’s Labour’s Lost