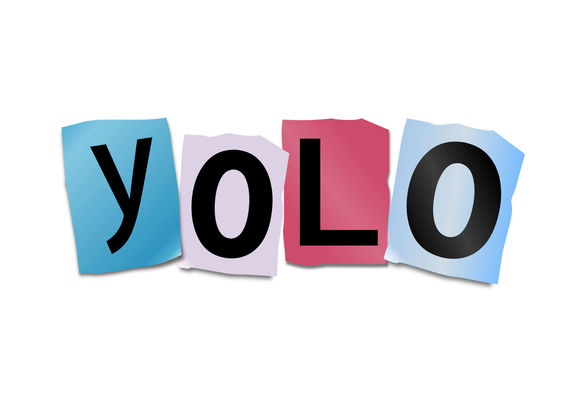 “Should i work on my essay or watch Orange is the New Black? YOLO — Netflix!” Uh-huh: that’s, like, the new yolo. Not the “woah: this is crazy stupid, but hell I’m gonna do it anyway” yolo of yore.

YOLO [pronounced “YO-low”] is an acronym for “you only live once”. If you’re over 25, it’s probably so under your radar — and, well, beneath your interest too. If you’re young enough not to remember the dial phone, you might have spent some time arguing or thinking about what exactly YOLO means and where its subtle, nuanced evolution has taken it, and whether it’s totally uncool to use it any more, unless everyone gets exactly how and why you’re still punctuating your sentences with it.

According to Urban Dictionary, YOLO is (or at least started out as) “carpe diem for stupid people”. It gives as an example “Dude 1: i’m gonna go smoke poison ivy and see if my lungs get a rash. yolo!” Put another way, it’s “the dumbass’s excuse for something stupid that they did.”

Seize the day! was the sentiment of the acronym slogan that might have been conceived as far back as 2006 when The Strokes sang “You Only Live Once”, but first really infected the lingo of Generation Y with epidemic speed when Drake rapped “The Motto” in 2011. The new “don’t worry, be happy” of 21st-century teenage bravado, YOLO soared to Number 1 on the Twitter hashtag charts, usually accompanying tweets (as the Huffington Post wryly observed) “that should have made any responsible friend and/or Twitter follower call the cops and/or a medic.” The interjection — unlike other verbal ejaculations of its grammatical kind — tends to come at the end rather than the beginning of a sentence, or even as a stand-alone statement with its own punctuation (invariably an exclamation mark, at least in its early incarnation).

But it wasn’t always funny. Perhaps the most famous, tragic and bleakly ironic use of the word was when aspiring rapper Ervin McKinness, while driving drunk at 120 mph in September last year, tweeted “Drunk af going 120 drifting corners #FuckIt YOLO”. That was just before he crashing the car, killing himself and everyone else in it. YOLO…

By the end of 2011, teen idol Zak Efron had the reckless motto of his generation tattooed on his right hand. But less than six months later, YOLO was officially over — at least in the cool stakes.

When a prestigious New England college incorporated the once-trendy acronym into its application process earlier this year, YOLO’s street cred was already way beLOW-LOW. Making it one of six essay options on the writing section of its application form, Tufts University invited its student hopefuls to write on the topic: “What does #YOLO mean to you?” More specifically, the admissions faculty chirped earnestly: “The ancient Romans started it when they coined the phrase “Carpe diem.” Jonathan Larson proclaimed “No day but today!” and most recently, Drake explained You Only Live Once (YOLO). Have you ever seized the day? Lived like there was no tomorrow? Or perhaps you plan to shout YOLO while jumping into something in the future. What does #YOLO mean to you?”

What DOES yolo mean today? Probably not quite the same as what Drake meant when he unleashed the motto on the masses a couple of years ago — or what Tufts seemed to make of it (if only ironically): a kind of jaunty bravery. Nowadays, the gung-ho has faded to jaded. Where YOLO might once have stood in for “f**k it, let’s do it!”, it’s now grown up, and in the twilight of its short-lived existence it’s all about irony and self-mockery, with an “in the paddling pool, living dangerously, Yolo” kind of thing going on. Modern yolo-tagging pokes fun at its hip and reckless former self. Is this the symptom of a more sober generation, with the irrepressible, irresponsible folly of youth knocked out of it? Or is it more that it’s a cynical, worldly and self-referential generation who laugh willingly and easily at themselves and their own transient fads and fashions — linguistic and otherwise? They’re living as dangerously as they ever have done, but are commenting on the ride with more salty and savvy humor. Because they get it.  #YOLO.