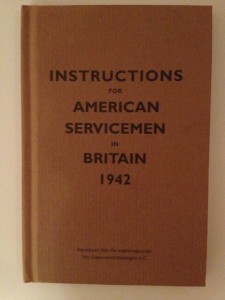 In 1942, the United States War Department distributed pamphlets to American servicemen heading over to Britain to help fight the war. The aim of the publication was to prepare the young GIs for life in a foreign culture (many of the young soldiers had never been abroad before) and to try and prevent any tensions or misunderstandings between the servicemen and the locals among whom they would be living and working. As explained to the GIs in the introduction to the War Department “instructions”: “In getting along, the first important thing to remember is that the British are like the Americans in many ways —  but not in all ways. You will quickly discover differences that seem confusing and even wrong. Like driving on the left side of the road, and having money based on an “impossible” accounting system, and drinking warm beer. But once you get used to things like that, you will realize that they belong to England just as baseball and jazz and coca-cola belong to us.”

The Times wrote an editorial about the pamphlet on July 14 of that year, predicting that it would be a bestseller and comparing it with the works of Irving, Emerson and Hawthorne (who had all tried to capture the essence of Britishness for American readers), saying that “none of their august expositions has the spotlight directness of this revelation of plain common horse sense understanding of evident truths”.

Here are some of the GI handbook’s observations about British English and the quirky word usage that the young American soldiers were warned to watch out for.

“The British have phrases and colloquialisms of their own that may sound funny to you. You can make just as many boners in their eyes. It isn’t a good idea, for instance, to say “bloody” in mixed company in Britain — it is one of their worst swear words. To say “I look like a bum ” is offensive to their ears, for to the British this means that you look like your own backside it isn’t important — just a tip if you are trying to shine in polite society. ”

“In England the “upper crust” speak pretty much alike. You will hear the news broadcaster for the BBC (British Broadcasting Corporation). He is a good example, because he has been trained to talk with the “cultured” accent. He will drop the  letter “r” (as people do in sections of our own country) and will say “hyah” instead of “here”.  He will use the broad a pronouncing all the a’s in “Banana” like the a in “father”. However funny you may think this is, you will be able to understand people who talk this way and they will be able to understand you. And you will soon get over thinking it is funny.”

“Instead of railroads, automobiles and radios, the British will talk about railways, motorcars and wireless sets. A railroad tie is a sleeper. … A man who works on the roadbed is a navvy. … The top of a car is the hood. What we call the hood (of the engine) is the bonnet. … Gas is petrol — if there is any.”

“You will have to ask for sock suspenders to get garters, and for braces instead of suspenders — if you need any. If you are standing in line to buy (book) a railroad ticket or a seat at the movies (cinema), you will be queuing (pronounced “cueing”) up before the booking office. If you want a beer quickly, you had better ask for the nearest pub.”

And finally, here were some important do’s and don’ts for the GIs heading off to a foreign land to face a common foe:

“Don’t make fun of British speech or accents. You sound just as funny to them, but they will be too polite to show it. … NEVER criticize the King or Queen. … You will soon find yourself among a kindly, quiet, hard-working people who have been living under a strain such as few people in the world have ever known. In your dealings with them, let this be your slogan: “It is always impolite to criticize your hosts; it is militarily stupid to criticize your allies.”

“You won’t be able to tell the British much about “taking it”. They are not particularly interested in taking it any more. They are far more interested in getting together in solid friendship with us, so that we can all start dishing it out to Hitler.”

A reproduction of the original pamphlet,  Instructions for American Servicemen in Britain 1942, was published by the Bodleian Library in Oxford, which holds a copy of the original typescript issued by the War Department in Washington DC. Other than the important language usage excerpts above, the book contains similarly enlightening sections with titles such as “British reserved, not unfriendly”, “The British are tough”, “Keep out of arguments”, and “indoor amusements” — which is essentially a paragraph all about the great British pub…