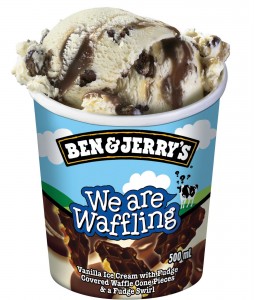 So, why is it called Ben & Jerry’s Ice Cream – and not Ben’s & Jerry’s? It’s what’s known as a joint possessive: because the ice cream is owned jointly by Ben and Jerry, they need only one possessive — ie. one apostrophe — between them. And this rule is good for limitless numbers of owners. Let’s say Jack Hypothetical joined the company and claimed his stake in their delicious branded FroYo: the three ice-cream men would still have to make do with just one apostrophe: Ben & Jerry & Jack’s FroYo.

Now, assuming that Ben & Jerry don’t live together, when it comes to talking about their homes we refer to Ben’s and Jerry’s houses, and to their respective loved ones as Ben’s and Jerry’s families. That’s not to suggest that they each have multiple properties or that either of them is a bigamist, however, and to be sure to avoid any confusion or ambiguity with regard to that plural matter, it’s sometimes wise to just reword the phrase. But giving them each their own possessive apostrophe clarifies that the items are separately owned — what’s Ben’s is Ben’s and what’s Jerry’s is Jerry’s — whether in single or multiple form.

First, going back to Jack Hypothetical: let’s say he started out as a friend of Ben’s. Looking at that sentence, I’ve twice indicated Ben’s possession of Jack (as a friend): first by saying “friend of” (with the of suggesting ownership), and then by giving Ben an apostrophe and an “s”. Why do we sometimes repeat the possessive sense like this? There’s no real reason, except that it’s been done for centuries and it’s generally accepted in standard English. In the same way that we say “it’s a habit of mine” (and not “it’s a habit of me” or “it’s a habit of I“), we naturally use the double possessive. In The Careful Writer (1965), Theodore M. Bernstein noted that “grammarians have argued over the origin and nature, but not the validity, of the double genitive with the fervor of hot-stove league fans rehashing a Word Series play.”

Now, what if we want to ask about Ben & Jerry’s ice cream’s calories? That seems a fair question, if a little awkwardly phrased (and a bit of a party pooper, if you ask me). This is the other form of double possessive: when something is owned by something that is in turn owned by something else. By far the best way of avoiding this sort of double possessive is to reword it: let’s ask instead about the calories of Ben & Jerry’s ice cream. But note that we don’t use the earlier form of double possessive in this case — ie. we don’t inquire after “the calories of the ice cream’s”, whereas we might inquire after that amazing FroYo idea of Ben’s (or Jerry’s? or both?). Only people and animate objects have the privilege of the extra possessive, it seems: not even ice cream warrants it. But please don’t ask me to explain why … 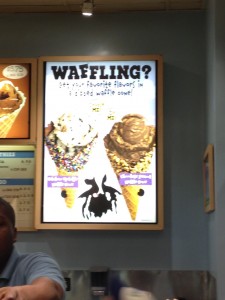 I know: I’m waffling now — but not in the American sense, which Oxford Dictionaries defines as “failing to make up one’s mind”. Ben & Jerry’s “Waffling?” poster uses some tasty word-play here, pointing out our failure to choose which flavor of ice-cream to put in their waffle cones. So yes, a lot of waffling goes on in North America’s Ben & Jerry’s Ice Cream stores. But this particular play on words would be lost on most Brits, to whom waffle means something different: “to speak or write, especially at great length, without saying anything important or useful”. Waffle seems to be what I’m doing and spewing here — since it comes in both verb and noun form.

Here ends this waffling of mine. A triple possessive is calling me: my Ben & Jerry’s Ron Burgundy’s Scotchy Scotch Scotch…