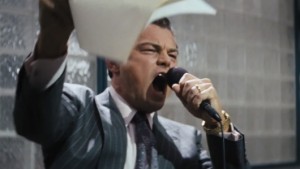 In her odd, rambling acceptance speech at the Golden Globes last night, after winning her best supporting actress award, Jacqueline Bisset let the word shit slip right out of her mouth — and, it seems, right past the TV censors. Bad bleeping, NBC. You can see the full cringe-inducing speech right here.

We’re not that used to hearing profanities on national network television, since its censorship process is usually pretty efficient. But in the movies — especially in the last three or four decades — it’s become a case of almost anything goes. Fuck, according to Wikipedia, is thought to be the taboo word used most in American film — and boy does it get used.

One movie that’s tipped to pick up a respectable handful of awards this season is Wolf of Wall Street. But it’s already landed itself a damned fine and dubious distinction: it has set the record for the most 4-letter F-words uttered in a single movie (well, apart from the 2005 documentary Fuck, whose subject matter allowed it to take a big fat helping of Hollywood’s favorite profanity). 506 F-bombs in the 179-minute comedy: that’s what Wolf notched up, pushing out 1999’s Summer of Sam, the previous record-holder with a mere 435 such bleepers.

According to Wikipedia, there are at least 107 English-language movies* — and possibly more — that feature the word fuck or one of its derivatives at least 150 times in their screenplays. That’s a lot of friggin’ effing. Scarface, from 1983, is the earliest movie to have entered this distinguished category, in 1983, with 170 occurrences; Platoon joined the list a few years later in ’86 with 159. Wolf is going to be hard to beat, with its incidence rate of 2.83 F-bombs a minute, although 1997’s Nil By Mouth managed to F— By Mouth some 3.34 p.m. …

Here are a few more fabulous factoids, courtesy Wikipedia, about the F-word and its more mild-mannered S-cousin invading our big and small screens with ferocious frequency:

See an earlier Glossophilia post about the sometimes ambiguous and downright silly content advisories that try and protect us and our children from these and other eyebrow-raising utterances.

* that’s non-pornographic movies, to be specific