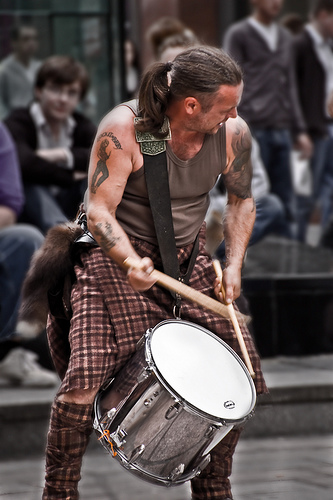 When you hear the word tattoo, do you think of skin pictures or of marching band extravaganzas? Maybe both, if you’re a British drumming soldier with a body-load of tats … Curiously, the two meanings of this unusual word have completely different origins in both time and place — and quite interesting stories behind their respective definitions. It’s not too surprising that they have nothing to do with each other (except perhaps that they’re both, loosely, forms of artistic expression, and soldiers often have lots of tattoos), but it is odd that they evolved eventually into the same word. And did you know that tattoo and taboo have more in common with each other than the fact that they rhyme? Here’s the scoop on tattoo, tattoo and taboo. 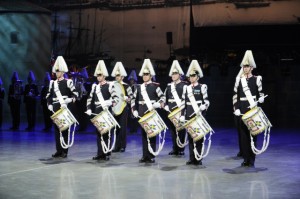 “An entertainment consisting of music, marching, and the performance of displays and exercises by military personnel.” — Oxford Dictionaries

This is the older meaning of the word tattoo, originating in Europe and dating back to the 17th century when the British army was fighting in the Low Countries (Belgium and the Netherlands). Drummers from the garrison were sent out into the towns at 9:30 each evening to let the soldiers know that it was time to return to their barracks; they did this by instructing the local innkeepers to stop serving beer and to send the soldiers home for the night, and hence the drumming routine was known as doe den tap toe (the Dutch words for “turn off the tap”). The soldiers would continue to drum until the 10pm curfew. The Dutch words tap toe eventually morphed — via tap-too/taptoo — into the English tattoo.

Over the years, this process of sending soldiers home for the night turned into something of an evening show, lit by floodlight or searchlight, with musical and theatrical or choreographed elements, often kicking off with the first post and ending with the last post sounded at 10pm. These tattoos were common in the late 19th century in military and garrison towns in Europe, and extravagant tattoos were held between the world wars. Today’s most famous example is probably the Edinburgh Military Tattoo, which is held outside Edinburgh Castle every August as part of the Edinburgh Festival.

According to the Online Etymology Dictionary, the 17th-century Dutch phrase tap toe also carried a figurative sense of “say no more”. In English, the transferred sense of “drumbeat” is recorded from 1755, and this probably explains the English phrase “devil’s tattoo”, which means a rapid or nervous drumming with the fingers or feet, according to the Collins English Dictionary. 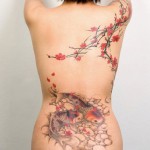 “To mark (a person or a part of the body) with an indelible design by inserting pigment into punctures in the skin (verb)”; “a design made by tattooing (noun)” — Oxford Dictionaries

The younger meaning of tattoo originated in the South Pacific. Evolving from tattaow or tattow in the 18th century, it’s a loanword from the Samoan tatau, meaning “correct” or “workmanlike”.

According to the Hutchinson Unabridged Encyclopedia with Atlas and Weather guide (2012), the word tattoo was brought to Europe by the explorer James Cook when he returned in 1771 from his first voyage to Tahiti and New Zealand. In his narrative of the voyage, he refers to an operation called “tattaw”. The first written reference to the word tattoo appears in the journal of Joseph Banks, the naturalist aboard Captain Cook’s ship the HMS Endeavour: “I shall now mention the way they mark themselves indelibly, each of them is so marked by their humor or disposition”. Before the Polynesian word came into the English language, the practice of tattooing had been described in the West as pricking, painting, or staining. 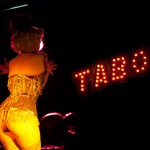 Like one of tattoo‘s incarnations, its rhyming sister taboo was also brought into the English language by the explorer James Cook, after his journey to the South Pacific. According to Wikipedia, it “comes from the Tongan tapu or Fijian tabu (“prohibited”, “disallowed”, “forbidden”), related among others to the Maori tapu, Hawaiian kapu, Malagasy fady. Its English use dates to 1777 when the British explorer James Cook visited Tonga. Describing the cultural practices of the Tongans, he wrote:

Not one of them would sit down, or eat a bit of any thing…. On expressing my surprise at this, they were all taboo, as they said; which word has a very comprehensive meaning; but, in general, signifies that a thing is forbidden.

When any thing is forbidden to be eaten, or made use of, they say, that it is taboo.

“The term was translated to him as “consecrated, inviolable, forbidden, unclean or cursed”. Tabu itself has been derived from alleged Tongan morphemes ta (“mark”) and bu (“especially”), but this may be a folk etymology (note that Tongan does not actually have a phoneme /b/), and tapu is usually treated as a unitary, non-compound word inherited from Proto-Polynesian *tapu, in turn inherited from Proto-Oceanic *tabu, with the reconstructed meaning “sacred, forbidden”. In its current use on Tonga, the word tapu means “sacred” or “holy”, often in the sense of being restricted or protected by custom or law. On the main island, the word is often appended to the end of “Tonga” as Tongatapu, here meaning “Sacred South” rather than “Forbidden South”.”