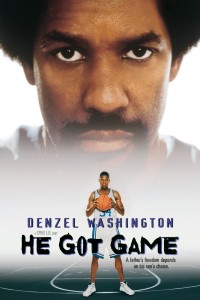 He did? Get game? Or does that mean he has got game — currently — whatever “game”-without-an-article means? As in, “He’s got that thing called game”? Or did he get that article-less game last week, on the same night that he got milk? Maybe it becomes apparent when you see the movie (which I had the chance to do this evening when it popped up on my TV guide), but I think we can safely say that its title lacks clarity — unless game is an abstract quality that he acquired some time in the recent past…

Here are 15 other movie titles that could have done with a good edit. If you can’t work out where they went wrong, check out their copy-edited versions below.

1. Honey I Shrunk the Kids: Do you mean you shrank them a while back, or that you have recently shrunk them? Maybe you drunk too much wine before you begun to shrink stuff …  (See Glossophilia’s earlier post on this and other dodgy past participles.)

2. Grown Ups: What does an “up” look like when it’s not grown? Are there infant ups?

3. Law Abiding Citizen: Unless Law (maybe Jude?) has decided he was tolerating citizen after all, there’s a rule-abiding fail here of the spelling kind …

4. Burn Hollywood Burn: How can you burn a burn, especially if it’s of the Hollywood kind?

5. Two Weeks Notice: They do? They notice what? That they’re missing an apostrophe?

6. Couples Retreat: They do? Does every couple do that, or just those featured in this movie?

7. Who Framed Roger Rabbit: Can you see a question mark anywhere

8. Wish I Was Here: And I bet you wish you knew how to use the subjunctive  …

9. Drive Angry: Is Angry going to the gym? He seems to need a ride … Please take him.

10. Million Dollar Baby: Are you describing or talking to Baby?

11. The 40 Year-Old Virgin: Let’s hope this isn’t about 40 innocent toddlers who’ve enjoyed only one birthday and were made singular by a missing ‘s’

12. Eight Legged Freaks: Those 8 freaks must be sober, assuming legged means the opposite of legless …

13. Can’t Hardly Wait: So … I guess you’re more patient than you thought you were?

14. Star Trek Into Darkness: I command thee, Mr. Celebrity, to walk into the shadows …

15. The Ladies Man: Is he the one who hangs out in the women’s restroom?

Now there’s another movie title that often doesn’t pass the punctuation smell test — but I’m inclined to take its big fat concept at face value and celebrate its comma-less correctness. My Big Fat Greek Wedding. Look, it’s a Greek wedding: it’s not just a wedding between two Greek people. It’s not a little Greek wedding, it’s big: but it’s not just a big Greek wedding that also happens to be fat. It’s a big fat Greek wedding. So there.

The Pursuit of Happyness. Because that makes it seem more happy.

Biutiful. Because that makes it sound more Spanglish.

Inglourious Bastards. Because that makes it look more — er — glowering?