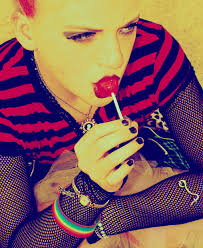 When we say something sucks — i.e. when something’s not good in a big way — are we being rather rude and referring to a particular kind of sex act? Or does this slang use of the verb have other more benign origins? (Warning: sexual vocabulary ahead.)

As Seth Stevenson pointed out in an article in Slate about ten years ago: “It’s not even clear that sucks has naughty origins. We might trace its roots to the phrase sucks hind teat*, meaning inferior. Or there’s sucks to you**, a nonsexual taunt apparently favored by British schoolchildren of yore.” Hmmm: good points, but is it possible that Stevenson is seeing the etymology of sucks through rose-colored spectacles, as a certain Rev Richardson did before him — and as Urban Dictionary suggests in its jazz theory of lousy horn-players (see below)?

At the turn of the 21st century, The Guardian ran a series of letters and comments on this subject, which we’re posting below for your entertainment and amusement. In the discussion, Jonathon Green, the world’s foremost slang lexicographer, offers a persuasive, faintly explicit and probably definitive oral history of “this sucks!”. However, do take time to read the oral arguments from other participants in the debate — including Rev Richardson from Middlesex and S Louth from London, who prefers a “dental oneupmanship” theory. And we’ll give the last word to New York’s Helen Macleod, whose colorful commentary runs the proverbial gamut from sucking d**k to appreciating the provenance of language.

“I keep reading the word “sucks” and the implication is that this is derogatory (Letters, September 11). I know this was made popular by The Simpsons, but why is sucking a term of abuse? Most people experience sucking as such a pleasant experience, as in ice lollies, breast feeding etc.”
Rev Neil Richardson
Greenford, Middx

“If I may assist the Rev Neil Richardson (Letters, September 12), the derisive or negative use of the verb “to suck”, especially in the phrase “this sucks”, is a 1950s coinage – predating the Simpsons, although originating, like them, in America. The sucking in question refers to the act of fellatio, for which “suck” has been a synonym since at least the 1920s. Like the consumption of lollies, most people experience this as a “pleasant experience”, but its use in slang is based on the negative depiction of the fellator as subservient and, in a mixture of misogyny and homophobia, in some way dirty.”
Jonathon Green
London

“The Reverend Richardson (Letters, today), is either very young or needs to get out more. The word “sucks”, as a derogatory expression, derives from “sucks ass”, an Americanism, nothing to do with donkeys, which pre-dates the Simpsons by at least thirty years, and maybe more.”
Ron Graves
Birkenhead

“Rev Neil Richardson is very innocent indeed (letters September 12). The perjorative Americanism ‘suck’, which predates The Simpsons, derives from dental oneupmanship. The Americans are universally proud of their pearly whites and loudly scorn anyone (ie the rest of the world) who cannot match this orthodontic pulchritude. Sucking on popsicles, lollies, candy etc threatens global oral domination and leads to the venemous insult: “You suck!” One American friend pithly translated this for me as: ‘You’re gonna get English teeth!’
S Louth
London

“I have researched the etymology of “sucks” (Letters, September 13) as a derogatory term in the US since I moved here six years ago and have drawn an absolute blank. … Although everyone I talk to, including the editor of a newsletter on slang in Los Angeles, insists (with a snicker) that it refers to sucking a penis, there is absolutely no supporting evidence (no record of “sucks dick” or whatever, being in common usage and then losing the accompanying noun, for instance). ,,, Moreover “that sucks” is used in entirely polite conversation, implying no obscene origin. New Yorkers also have a habit of saying: “Well, that really bites the big one,” as an expression of dismay. When asked “bites the big what?”, they have no idea. Then, after thinking about it for a while, they come up with the seemingly inevitable assumption that it refers to a penis. …You have to get used to the idea that expecting the origin of language to be logical and traceable is not a universal phenomenon. One of the remarkable things about America is a near total indifference to matters of etymology. Or perhaps, what is remarkable about Britain is that ordinary people care about the provenance of language and its uses. In any case, the origin of this and many other American slang terms is, sadly, lost in the mists of time and indifference, leaving it open to speculation by the blow-job obsessed Generation X. Which kinda sucks, if you ask me.”
Helen Macleod
New York

* Suck hind tit “be inferior” is American English slang first recorded 1940. “The old, old saying that the runt pig always sucks the hind teat is not so far wrong, as it quite approximates the condition that exists. [“The Chester White Journal,” April 1921] — Online Etymology Dictionary

** Suck eggs is from 1906. (Online Etymology Dictionary)  The OED does make reference to sucks being a childish expression of contempt — but without clarifying whether or not it relates to the more modern meaning of being contemptible (as explained by Barrie England on stackexchange). “Ya boo sucks” is in this same vein.

*** According to someone on Urban Dictionary: “The early Jazz musicians would say that a guy could really “Blow” if he had a good sound when playing the horn. If he couldn’t play very well then they would say that he was “Sucking” on that horn. That’s where the term “Suck” as being something bad came from. He plays that horn so poorly that he must be sucking on it. He doesn’t blow, he sucks.”