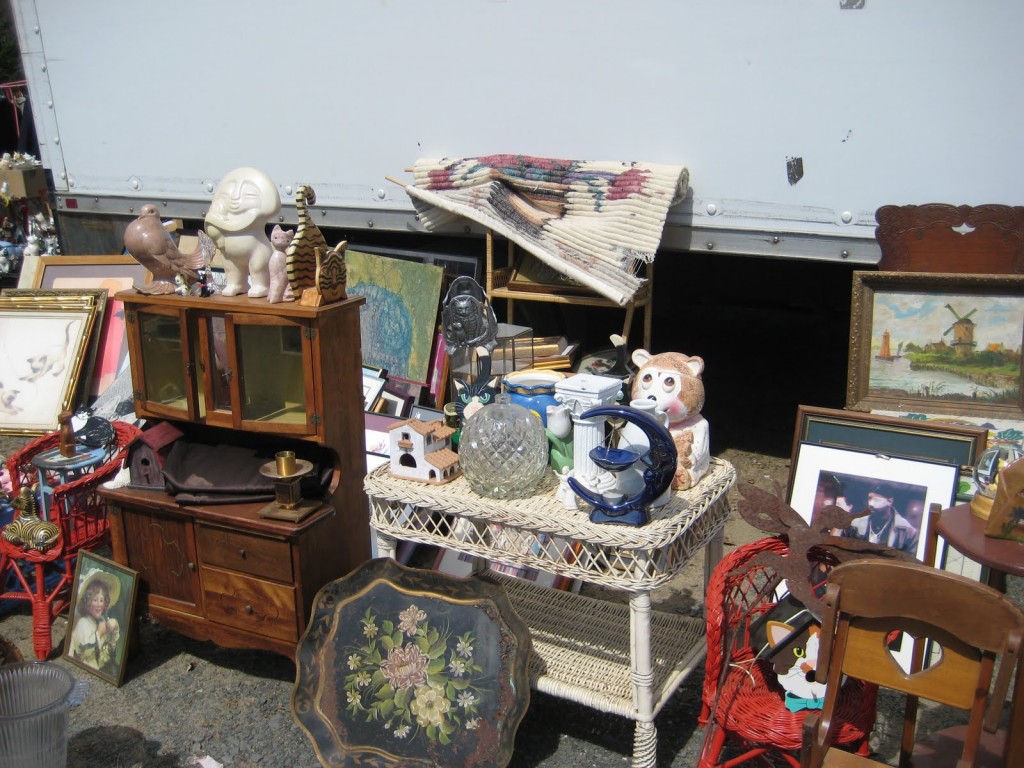 A post about flea markets and yard sales, first published in February 2013. Do you know what Brits call them?

There is some disagreement about the origin of the term. The most popular and plausible theory is that it is a direct translation of the name of the French “March aux Puces” (Market of the Fleas), the famous large outdoor market on the northern outskirts of Paris that was supposedly named for the flea-bitten second-hand goods it was (and still is) known to sell — everything from antiques and household junk to furniture and vintage clothing.

The OED tends to confirm this etymology, citing the earliest known English usage in 1922, when George Dougherty wrote in his book In Europe that the Marche aux Puces “is called the ‘Flea’ Market because there are so many second hand articles sold of all kinds that they are believed to gather fleas.”

Another theory dates the name back a hundred years and moves it across the Atlantic to 18th-century New York and its “Fly Market”, which at the time was the city’s principal market that stood on a salt marsh near the East River. “Fly” is thought to have been the Anglicized version of the Dutch word “vlie” — actually pronounced “flea” — which means swamp or valley.

The flea market is a worldwide phenomenon: from Addis Ababa’s Merkato (Africa’s largest open-air market) to China’s Kashgar bazaar and Guatemala’s Chichicastenango, from London’s Portebello Road to Bangkok’s Chatuchak market, from the humble Brooklyn stoop sale to Istanbul’s Grand Bazaar (probably the world’s largest covered market), there are bazaars and informal sales of goods old and new in practically every village and city on earth. And they have existed since civilization began, starting with simple bartering between neighbors. The marketplace of the ancient Greeks was the “Agora”; for Romans, it was the “Forum”; and in Israel, they went to market at the “Temples”. Names for today’s informal sales are as colorful and useful as the treasures you can find there : England’s outdoor markets are also known as “car boot sales”; its indoor markets held in schools or church halls are called “jumble sales” or “bring-and-buy sales”. The more impromptu, informal sales by American families or street and block communities are called, variously, “yard sale”, “rummage sale”, “tag sale”, “lawn sale”, “block sale”, “attic sale”, “moving sale”, “garage sale” or “junk sale”. Australians dub them “trash and treasure markets”. And all because one man’s trash is another man’s treasure, wherever you are in the world.