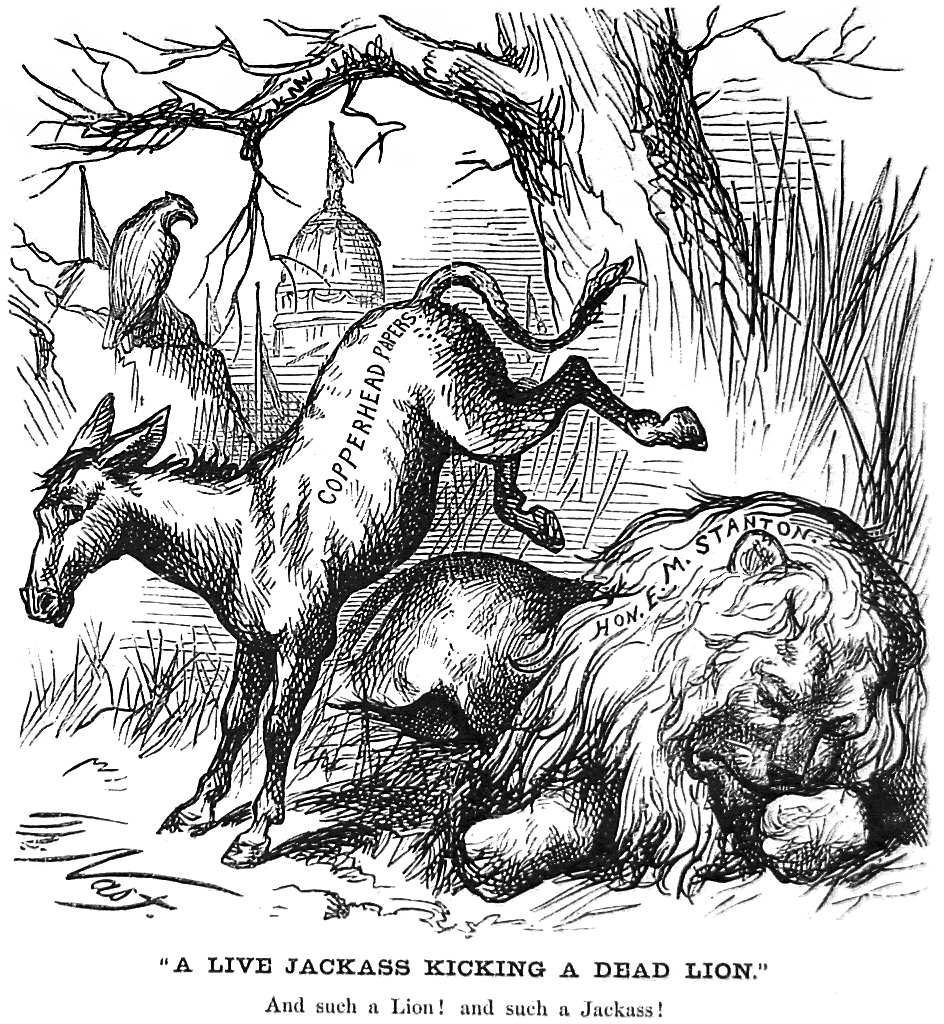 On the eve of the Democratic National Convention, which starts in Philadelphia tomorrow, Glossophilia examines the history of the party’s name, and of its mascot, which itself derives from the name of the Democratic Party’s founder. (See also Glosso’s post last week about the origins of the Republican name.)

Tracing its heritage back to Thomas Jefferson’s and James Madison’s Democratic-Republican Party, the modern-day Democratic Party was founded around 1828, making it the world’s oldest active party. Initially calling itself the “Republican Party,” Jeffersonians were labeled “Democratic” by the opposition Federalists, who hoped to stigmatize them as purveyors of democracy or mob rule.* By the Jacksonian era, the term “The Democracy” was in use by the party, and the name “Democratic Party” became its official name in 1844, as explained by Encyclopedia Brittanica‘s potted history of the party excerpted below.

Members of the party are called “Democrats” or “Dems”.

The common mascot and symbol for the party is the donkey, or jackass. Andrew Jackson’s opponents, during the 1828 presidential campaign, twisted his name to “jackass” as a term of ridicule, symbolizing a stupid and stubborn animal. However, rather than rejecting the label, Jackson was amused by it and included an image of the donkey in his campaign posters. Its most lasting impression came from the cartoons of Thomas Nast from 1870 in Harper’s Weekly. Cartoonists followed Nast and used the donkey to represent the Democrats.

From Encyclopedia Brittanica: “The Democratic Party is the oldest political party in the United States and among the oldest political parties in the world. It traces its roots to 1792, when followers of Thomas Jefferson adopted the name Republican to emphasize their anti-monarchical views. The Republican Party, also known as the Jeffersonian Republicans, advocated a decentralized government with limited powers. Another faction to emerge in the early years of the republic, the Federalist Party, led by Alexander Hamilton, favoured a strong central government. … The Federalists called Jefferson’s faction the Democratic-Republican Party in an attempt to identify it with the disorder spawned by the “radical democrats” of the French Revolution of 1789. After the Federalist John Adams was elected president in 1796, the Republican Party served as the country’s first opposition party, and in 1798 the Republicans adopted the derisive Democratic-Republican label as their official name. …  During the 1820s new states entered the union, voting laws were relaxed, and several states passed legislation that provided for the direct election of presidential electors by voters … These changes split the Democratic-Republicans into factions, each of which nominated its own candidate in the presidential election of 1824. … Despite Adams’s victory [in that election], differences between the Adams and the Jackson factions persisted. … Jackson, whose strength lay in the South and West, referred to his followers simply as Democrats (or as Jacksonian Democrats). Jackson defeated Adams in the 1828 presidential election. … From 1828 to 1856 the Democrats won all but two presidential elections (1840 and 1848). … [T]he Democratic Party, as it officially named itself in 1844 …”

* according to Joyce Appleby in her book Thomas Jefferson (2003)