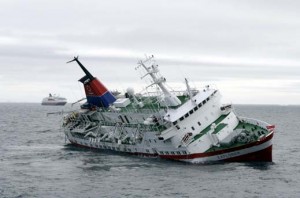 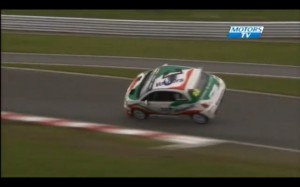 Continuing Glosso’s month-long series “X v Y”, we look at two words that are spelled almost identically, and used almost interchangeably, but are not actually synonymous. Career and careen: what’s the story?

That ship above is definitely careening. And so is the car — at least in the modern (American) sense of the word. But in all likelihood it’s only the car that is careering. If someone describes their experience of seeing a boy on a sled either careering or careening down a snow-covered hill, you can imagine the picture pretty clearly: the kid is probably traveling pretty damn fast, and he’s having a bumpy ride of it.

As Paul Brians says in his book Common Errors in English Usage, “a truck careening down the road is swerving from side to side as it races along, whereas a truck careering down the road may be simply traveling very fast. But because it is not often clear which meaning a person intends, confusing these two words is not likely to get you into trouble.” Well, that gets us all off the hook, so maybe we should just leave it at that. … But why do some people get all hot under the collar when they hear the two verbs being used interchangeably? Are they really that different from each other?

The answer is both yes and no, depending on whom you ask. The OED gives this definition of career in its form as an intransitive verb: “take a short gallop; charge; (of a horse) weave from side to side while running; 2. go swiftly or wildly, rush headlong, hurtle.” For careen, the original nautical senses are given first: transitively, to “turn (a ship) over on one side for cleaning” or “to cause (a ship) to heel over, and, intransitively, (of a ship) to incline to one side or lie over when sailing on a wind.” The last definition, which the OED specifies as being influenced by the verb career, is “to rush headlong, hurtle unsteadily.”

Fowler in his Modern English Usage explains the history and evolution of careen: “The only meanings known to the dictionaries up to the middle of the 20th c. were nautical. In the transitive sense (the commonest) a ship was careened when she was turned over on her side to clean or repair her hull; in the intransitive sense a ship careened when she heeled over under sail. But the word had appeared in U.S. fiction in contexts in which it was clearly intended to have a quite different meaning — that of rapid movement. Henry heard the Ford taxi coming out of the side street and saw it careening up on to the dock. The taxi was conveying gangsters from a bank they had robbed to a boat they hoped to escape in, and as the bank’s alarm siren was already sounding we may presume that the author’s intention was to indicate very rapid movement indeed. Why this innovation should have proved attractive to writers of fiction we can only guess. … Perhaps its popularity comes from a latent suggestion of simultaneous careering and careening — of a pace so wild that the vehicle sways from side to side and takes its corners on two wheels. That explanation seems to be favoured by the first lexicographer to take note of the new meaning, with the definition “to lurch or toss from side to side” (Webster).”

According to the Online Etymology Dictionary, careen started being confused with the verb career — getting its new sense “to rush headlong” — in about 1923.

It’s probably important to note that careen is fairly rare in the UK. I don’t think I ever heard it used in modern everyday speech until I arrived in the States. A search of the verb on the British National Corpus returns just three results — and one of those uses the word in its original nautical sense: “The men only had to scrape the ship and careen her, recaulk her seams and overhaul her rigging in readiness for the voyage home to market.” However, the Corpus of Contemporary American English returns 138 results, which seems to confirm Fowler’s suggestion that careen‘s modern meaning blossomed in North America, where it has become synonymous with (and possibly even overtaken) the verb career. The meaning of ‘to run wild, to rush headlong, especially with an unsteady motion’ is now officially acknowledged by three American style guides: Columbia, American Heritage and the Wall Street Journal’s. (However, Follett’s, Garner’s and the New York Times’s all insist that careen should be used only to mean “to lean like a ship”.) Career remains the verb of choice when describing this activity of reckless speed over in England.

Mark Davidson advises against using either verb in his book Right, Wrong, and Risky. He recommends doing the following: “Save career for its clearly understood meaning as a synonym for the noun profession. Save careen for posing showoff questions to sailors: “Careened any good ships lately?”