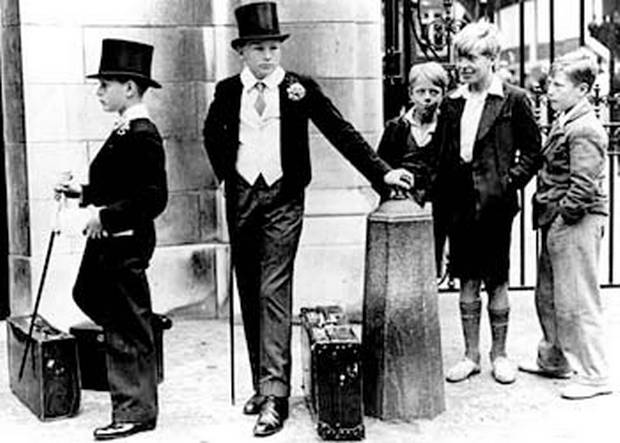 Glosso’s “X v Y” series tackles the complicated matter of British schools: when are they public, and when are they private? Can any actually be both?

I found myself in a quandary recently. I was having a conversation with an American about our respective upbringings, when he suddenly stated quite confidently, but with a question-mark in his voice that suggested an inkling of self-doubt: “I assume you went to public school in the UK (?)” That statement-question gave me pause, and I wasn’t quite sure how to answer him. You see, it’s complicated …

First, I know that most Americans when they talk about “public school” on their home turf are referring to state- or city-funded educational institutions with no tuition fees or other private funding. And, quite sensibly, Americans give the name “private” to fee-paying schools, which don’t fall into the public category. Public is the opposite of private: that’s simple enough.

But I’m aware that Americans (especially the more worldly ones) generally know that Brits are eccentric and that they have a strange way of calling private schools “public”, and therefore I suspected that my dinner companion took this to be the case: that I attended a private (ie. not publicly-funded) school in the UK. In that he was correct. But would I say that I went to a public school? Actually, no, I wouldn’t (and I never have done). However, did I attend a public school? Er – yes, I suppose technically I did.

When you talk about “public school” in England, it conjures up a fairly consistent image in most people’s minds: of a place that houses teenaged boys, well-heeled and toffee-nosed, sporting cut-glass accents and cricket bats, burdened by the rewards and expectations of a privileged upbringing, clad in hats, gowns and dress-shirts, blessed with the treble voices of hymn-singing angels and the Latin-learned minds of ancient philosophers, and destined for greatness in Britain’s ruling classes or in the superior ranks of its armed forces.

The place I went to was a hippy, progressive, co-educational, nicotine-friendly, rule-bending school that was positively averse to uniforms, organized religion, competitive sports or unkindness. It couldn’t have been more different from what “public school” evoked in the mind of an Englishman: there were no cold showers or cross-country runs before breakfast, no stiff upper lips or harsh dressing-downs, and fagging and flogging were concepts we only read about in novels. Public schoolboys are meant to turn into prime ministers, army generals or ambassadors; notable alumni from my school include a fraudster, a psychological illusionist, a bounty hunter, and one of the early incarnations of Dr Who. And yet, by true definition, the school I attended in the heart of the Surrey countryside was indeed a real “public school”.

The term public school was first recorded in England as early as 1580. At that time it described a publicly managed grammar or charity school that was founded to benefit the public by educating poor scholars. Such schools would be funded by the king or crown, by universities and charities, by cathedrals and churches (and foundations set up in the aftermath of the dissolution of the monasteries during the Reformation), or by wealthy merchants and benefactors. By the 18th century, the reputations of these fine grammar* schools had started to spread outside the villages and towns they served, and as the schools began to accept families who could afford to board and educate their children further away from home, so the term “public school” came to mean something slightly different. With access to and eligibility for these schools no longer restricted by one’s religion, occupation or home location, anyone in the nation could theoretically be educated in them (regardless of who was actually paying for that education), so they became “public” rather than local schools.

The Public Schools Act of 1868 took seven of the top schools in the country — Charterhouse School, Eton College, Harrow School, Rugby School, Shrewsbury School, Westminster School and Winchester College — and removed them from the responsibility of the Crown, the established church or the government, granting the schools independence over their own administrations and creating the first official batch of public schools. And it was this selective group of elite “public” boys’ schools that gave the word both its meaning and its connotations that endure today. However, the label continued to evolve and to embrace a broader category of establishments, as other schools (mostly at this point fee-paying or privately-funded boarding schools) modeled on this elite group began to grow and flourish. Just a year after the Public Schools Act, a group of 60 or 70 headmasters** of these academically rigorous institutions of learning — mainly educating boys between the ages of 13 and 18 — came together to form what would become the Headmasters’ Conference (later the Headmasters’ and Headmistresses’ Conference); it was membership of this conference that defined what a “public school” was then, and that remains the official definition today.

What do Brits call the schools known in America as “public”, ie. government-funded, non-fee-paying institutions? Secondary schools in this category that are non-selective are known as “comprehensives”, and a more general term is “state schools”. There are a few remaining “grammar schools” in the UK, which are selective state-funded schools. As in America, fee-paying establishments are called “private” or — more commonly in the last few decades — “independent schools”.

British public schools have had a long, firm association with the ruling classes since their inception. Historically they educated the sons of the English upper and upper-middle classes, and they prepared their students for entry to the ancient universities of Oxford and Cambridge — or for public service (which is another possible origin for the word public in this context). The sons of military officers and senior administrators of the British Empire were educated in English public schools while their parents served in postings overseas.

Although they were traditionally and historically boys’ boarding schools, most public schools now take day pupils and have become either partly or fully co-educational. Indeed, many distinguished girls’ schools — such as the famous Cheltenham Ladies’ College, Roedean, Benenden, and St. Swithun’s, to name just a few — are as “public” in nature and reputation as their boys-only counterparts ever were; and yet, the term “public schoolgirl” doesn’t roll off the tongue with as much meaning and heft as its male equivalent does.

In his 1977 book, The World of the Public School, George MacDonald Fraser writes, “For better or worse, the public schools have had a hold on Britain for close to two centuries. They have trained most of the men and many of the women who run the British government, armed forces, civil service, church and commerce. They have influenced every aspect of Britain’s national life — and, through the old Empire, a sizeable part of the world as well.”

* grammar schools have their own interesting history, to be addressed in a later post

** heads of schools, who are called “school principals” in the U.S.

2 thoughts on “The British “public school”: what does public really mean? Private?”