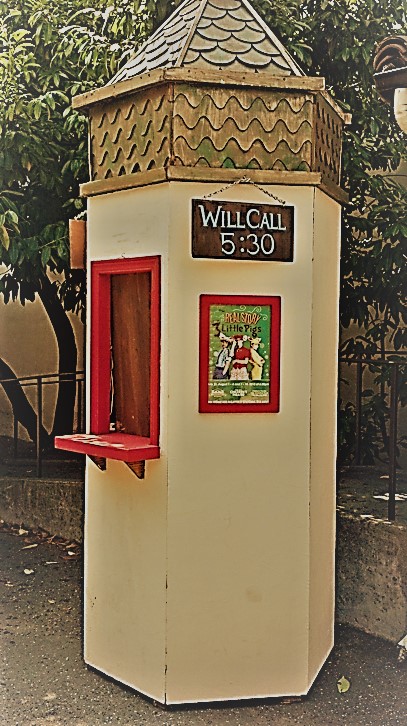 A Brit in San Diego might be forgiven for wondering what the sign hung on the children’s theater’s box office actually means. Who will call whom at 5.30? Or is it a note to Will (missing a comma), asking him to call at 5.30?

It’s an odd term, “will call”, but any American who’s ever picked up her ticket at the box office before the show knows exactly what it means and why she needs to look for the will call window — or, more simply, for will call.

Strangely, the OED recognizes it only as an adjective (with the requisite hyphen), defining it as “relating to or denoting a place (typically a ticket window or office) where items that have been paid for in advance can be picked up.”

I’m going to stick my neck out and say that the rarely hyphenated “will call”(sometimes capitalized as “Will Call”) is used as a noun nowadays more often than as a defining descriptor. “Your tickets will be at the theater’s will call,” we’re used to hearing, and we don’t need a “window” or “desk” at the end of the sentence to know what they mean.

Curiously, the way the noun-phrase is pronounced actually substantiates this theory, as you’ll see from its etymology.

According to Merriam-Webster, it originates simply from the notion “(the purchaser) will call” – i.e. as a verb phrase. But as “will call” has slowly evolved into a self-sufficient two-word noun phrase, it has gone through a process very similar to what linguists call “initial-stress derived nominalization” — where we tend to stress the latter syllables of verbs, but we go heavy on the first syllable when that same word is used as a noun. (Think “my schedule conFLICTS with his” vs. “there are CONflicts in our schedules”.) Now to the phrase in question: whereas we would normally stress the second word in a verb phrase ( e.g. “she will CALL on Tuesday”; “he had FAILED to win her heart”), in its newfound noun form, the emphasis has shifted back to the word will, making it sound even more distant from the phrase’s original verbal context.

Back in the day, we’d have said the purchaser will CALL for his tickets. Now, they’re at WILL call.