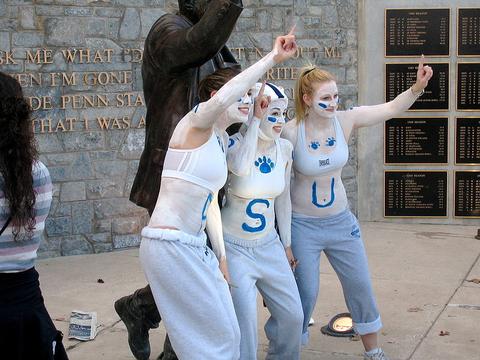 Does your 20-something daughter sometimes use words or phrases that you sort of get — because she’s gesticulating with her thumbs and pulling a face that kinds of give you clues about what she might mean — but you’re not completely down with the lingo? Well you don’t need to wonder any more, because Glosso brings you a mini-glossary of 10 millennial slang words you should probably know — especially if she’s calling someone fleek or swoll, or if the new bae is coming to dinner …

Oxford Dictionaries:  US informal noun: “A player of a ball game, especially a talented basketball player. A successful person, typically one who has a lavish or self-indulgent lifestyle.” adj. US informal: “Extremely good or impressive; excellent.”

(about Beyonce’s “Formation” video): “It’s the blackest of black. It’s not Pharrell’s new black (no shade!) — it’s your grandmother’s black. Her idea of swag is keeping hot sauce in her bag while she’s decked out in Givenchy. That’s baller, and that’s why the world slash Internet is going nuts.” — New York Times

“I think she honestly loves watching Mad About You and making cinnamon toast and buying L.L. Bean pajamas. And it’s not because she’s “basic.” She’s just a unique breed—a unique weirdo.” — Vogue.com

“Last year, Lauren [Conrad] called out a different magazine for calling her basic, but now, she doesn’t mind the description because, well, she has better things going on. ‘I probably am pretty basic,’ she says. ‘But I’m also a pretty happy person, so that’s OK with me.'” — MTV.com

Urban Dictionary: “A young woman who wears ugg boots, uses fake tanner, generally wears too much makeup and uses the word “Whet” frequently in conversation. Can be seen in the highest frequency at most of today’s large city college campuses.”

“When the world gets you down, any bad betch knows how to put one back. Put the weight of the world behind you, I mean, and go for a long, head-clearing walk. But when you come back and get down to your normal evening of painting your nails, looking at pictures of horses, and playing solo Madden, or whatever stuff you girls do, you might want a nice estrogen-y cold one to slurp it all down with.” — Harvard Crimson

Oxford Dictionaries: US informal: “A person’s boyfriend or girlfriend (often as a form of address)”

“According to In Touch, the actress [Halle Berry] chose to end things with her young bae while they were vacationing in Bora Bora. As in, smack dab in the middle of paradise.” — BET.com

“But there’s one person who has long been a dedicated fan. A certain Meghan Markle, who has been spotted in a plum satin take by Marchesa, among a number of other gorgeous examples. Truly the perfect princess-in-waiting. And, as evidenced by a post on her Instagram account, she also happens to read The Times on a Wednesday. No wonder her fashion choices are on fleek.” — The Times of London

Merriam-Webster: “‘Lit’ has been a slang term meaning “intoxicated” for over a century. In the last ten or so years, lit has transitioned from being applied to the act of intoxicating (“gonna get lit”) to the environment of those who are lit (“party’s lit”). The wildness of such parties has led to lit gaining the meaning “exciting,” as well as a broader meaning along the lines of “excellent”. (See also Glosso’s earlier post “Lit: Drunk, high, happy – or something else?“)

“But then also for culture, historically all the arts were setting the tone of culture. They were drawing the line for this is quality, this is what matters, this is important. Easy, renaissance period, you know it was lit at the time – new thought, new thinking, philosophies, art is popping, ideas are being exchanged, science is evolving, and you can see it in the art.” — Miguel quoted in Forbes

“Here he is looking proud, likely thinking to himself, “Wow! I can’t believe I, Ed Sheeran, am at Buckingham Palace right now. It’s lit.” — In Style

Quora: “Swoll” or “swole” means in modern slang to be “very muscular; jacked; ripped”, so ‘get swoll’ is ‘get muscular’, i.e. ‘work out’. ‘Swoll’ originally was a dialectical variation of the standard English ‘swell’, present in Southern and African American Vernacular English. Wiktionary attests to some alternative meanings in the dialect form ‘swole’ not present in standard English, which might have aided the word developing its current meaning, specifically, “Pertaining to men showboating themselves in front of one another, sometimes before a fight.”

“Now that he is swoll, the rapper must maintain it. ‘We mix in strength training, cardio work and recovery as much as we can on a daily basis,’ Roxx told the Observer about how Drake works out while on the road.” — The New York Observer

Online Slang Dictionary: “take a loss”, i.e. to suffer a loss in a competition.

“We’re told cops only took him [Tyga] to the station because of the crowd, including paparazzi, outside Avenue and they wanted to avoid making a scene. He took an L with Kylie, but got the win with cops. Decent trade?” — TMZ.com

Oxford Dictionaries: US informal: Publicly criticize or express contempt for someone.

“When he [Graham Norton] threw shade at Romania” –– The Telegraph

“Pope Francis has never been one to shy away from expressing his thoughts, especially when it comes to President Donald Trump’s administration. Back in February, he threw shade by calling out Trump for his travel ban without even mentioning his name.” — Popsugar

“‘She’s Gotta Have It’s Cleo Anthony Got A Crash Course In Being Woke From Spike Lee. … Apparently, one of the many perks of working on a TV show with Spike Lee is that you get to have one-on-one lessons in ‘wokeness‘.'”(See also Glosso’s earlier post “Woke – a new form of awake.”

Plus one for luck:

“In their eyes, they’ve done everything they’re supposed to. They play respectability politics. And they are putting Deja on a path towards that bougie lifestyle. They are teaching her that if you work hard and follow the rules, you can have those iPads, those fridges with the see-thru doors, those gates on your driveway, and those white neighbors who you are desperate to never scare.” — Elite Daily