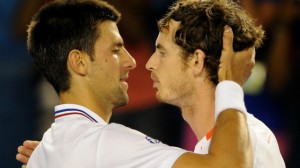 Glossophilia is posting this one again — as Wimbledon fortnight gets underway. Djokovic and Murray aren’t meeting tomorrow, but they’re both still in the game (just!). Familiar faces, but new balls …

They’re meeting tomorrow in what promises to be a nail-biting Wimbledon final (nail-biting at least for the great British public). But how much love will there be on Centre Court between these two formidable sportsmen, Novac Djokovic and Andy Murray? On the scoreboard, there might be a fair amount during the course of the match; perhaps not so much on the court itself. Why is love the name given to the score for zero in tennis? And what the deuce is the story behind the score for 40-all?

The tennis we know today began in its most rudimentary form in 11th-century France, and so it takes not just its own name but much of its vocabulary from the original language of the game. It’s commonly understood that the word deuce comes from the French word for two, deux, but beyond that there’s no real evidence for what that number represents in the context of the game (and specifically the word deuce for when the players are at 40 all). Some think it comes from the phrase à deux le jeu, whose literal translation is open to interpretation: it can mean “to both the game” (ie. the two players have equal scores and therefore an equal chance of winning the game), or it can translate to “to two the game” – ie. either player needs two consecutive points to win the game. Tennis historians will probably never agree on which theory is correct. Curiously, although the English word for the most exciting score in a game of tennis has its roots in French, that’s not the word (or even similar to the word) you’ll hear at the French Open when the scoreboard reads 40-40: égalité (“equality”) is what the umpire says at Roland Garros. At the Masters tournament in Madrid, the Spanish say cuarenta iguales (meaning “40 equal”).

There are about as many theories for why love means zero in tennis as there are Grand Slam wins under Roger Federer’s belt. The OED argues that the word is rooted in the colloquial phrase “for love,” meaning (in the context of a game or competition) “without stakes being wagered”. This would certainly tie in with the long and distinguished history of etiquette and sportsmanship in the game of tennis, even though the financial stakes in the modern game are high indeed. A similar and very plausible idea relates it to the Dutch expression iets voor lof doen, meaning to do something for praise, or more specifically omme lof spelen — “he played for the honor”, implying no monetary gain. This is backed up by the Online Etymology Dictionary, which dates the sense of “no score” (in tennis) to 1742, from the notion of “playing for love,” i.e. “for nothing”, from the 1670s.

Another popular theory is that love sounds similar to the French word l’oeuf, meaning egg, whose shape resembles that of the zero on the scoreboard; however, there’s no evidence to support this whimsical claim. Then there were two etymologies proposed by a New York Times article in July 1919 about the origins of tennis words, suggesting that “the toughest of the lot is the much derided ‘love’ itself … and no-one has been able to explain its origin. One possible and perhaps the best solution is offered by a foot-note in Singer’s rare book on ‘Playing Cards’, which states that there is an old Scotch word ‘luff’, meaning ‘nothing. Another word of similar sound and the same intention is said to be of Far Eastern origin, and, as an old form of tennis unquestionably flourished in the Orient, this word may also have been the parent of ‘love’.

Two more tenuous suggestions are that love derives from the French word l’heure (“the hour”), or that it comes from an understanding that at the start of any match, when the score is zero, the players still have love for each other. (But that wouldn’t explain the score at 40-love, surely …?)

Another tennis name whose origin is unclear is the racquet (or racket). Some think it derives from the Dutch and Low German racken, meaning “to stretch”, referring to the stretching of strings. There are also two Romance words, rachette and rasquetta, and an Arabic term rahat al-yad, all meaning “the palm of the hand”, which might actually be the forebears of the name of our modern instrument, since tennis was originally played like handball, with the strings stretched between the fingers rather than across a frame. However, the theory preferred by most modern linguists is that racket/racquet derives from the Flemish word raketsen, in turn from the Middle French rachasser, meaning “to strike (the ball) back”.

Here are some further tennis words and the dates of their respective origins (at least in the context of tennis) from the Online Etymology Dictionary:

Seed:  Sporting (originally tennis) sense (1898) is from notion of spreading certain players’ names so as to insure they will not meet early in a tournament. The noun in this sense is attested from 1924.

Advantage: Tennis score sense is from 1640s, first recorded in writings of John Milton, of all people. [It seems that the word was shortened to “vantage” at some point, but has reverted to the full word.]

Serve: Sporting sense, in tennis, badminton, etc., first recorded 1580s; the noun in this sense is from 1680s.

Finally, although this refers more to numbers than to words (but while we’re on the subject of tennis terminology), here’s one popular theory for the strange scoring system in a tennis game (ie. love, 15, 30, 40, game). It’s thought that games were originally scored using a clock-face, and as each player scored a point, the hand would move forward by a quarter of the face — arriving back at the 12/top to mark a win. But why 40 and not 45? Well, because of the requirement for 2 consecutive points from the same player in order to win a game (and hence to advance their hand from the 9/45-minute mark up to the top of the score clock), the hand would shift forwards by 10 points after 40 (ie. halfway to the winning 60/12), and then a further 10 points to secure a win — or back to 40 if the advantage were lost. It would have been too difficult to halve the last “15 minutes” or quarter of the clock-face to accommodate those final “half” points, so 40 replaced 45. (It has also been suggested that 40 was just a shortened version of 45.) That garbled explanation is just one theory for the curious tennis scores; there are others, including one about the importance of the number 60 in early France.

It’s unlikely that we’ll see any love on the scoreboard at the end of tomorrow’s final. But stranger things have happened on Wimbledon’s fabled courts …

1 thought on “Love, deuce and all that jazz”