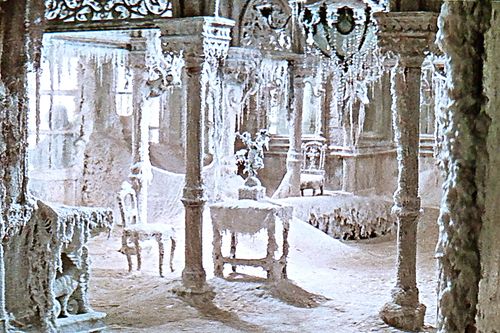 As Glosso approaches its tenth birthday in ten weeks’ time, we’re publishing the ten most popular posts again in weekly installments, with some extra tidbits and updates thrown in. We start with a perennial winter Glosso favorite, posted again today when it’s as cold as #*%$ here in the frostiest of US winters (and I mean that metaphorically more than literally).

Today we’re throwing in another cold simile: can you guess whose frigid pen wrote these words back in 1850? “It was as cold as Blue Flujin, where sailors say fire freezes.” See appendix below for the answer.

First posted on Jan 12, 2015: As the mercury strains to inch above its frozen winter threshold, and we breathe steam from behind our mittened hands guarding scarf-garlanded faces, we reach for words, similes and metaphors to describe the frigid temperatures that govern our daily minds and deeds, as centuries of cold humans have done before us. Here are some of those gelid turns of phrase, both enduring and outmoded, that have issued from numb lips and frosty quills — some vulgar, many artful — in all their icy eloquence.

“As cold as stone”: from Shakespeare’s Henry V:

Phrase Finder gives the whole speech, as well as another couple of “as cold as” similes that the Bard used in his works.

“Cold enough to freeze the balls off a brass monkey”: does this refer to the three wise monkeys from Japan, or to brass triangles that supported stacks of iron cannon-balls on sailing ships (that were commonly known as monkeys)? Phrase Finder explains all …

“As cold as a witch’s tit in a brass bra” (or in its more intensified form: “colder than a witch’s tit“): There doesn’t seem to be a firm consensus about the date or origin of this other brassy phrase, but a discussion on Wordwizard points to two claims about the timing of its first utterances. First, the Shorter Dictionary of Catch Phrases by Fergusson from the work of Erik Partridge & Paul Beale suggests that it has been used in the USA since the 1930s or earlier, and occasionally in the UK. However, the Cassell’s Dictionary of Slang has it originating several decades later, in the 1960s. Why is a witch’s tit cold?

“Cold as charity”: Alison Dunn, in her 2006 article “Cold as charity: poverty, equity and the charitable trust”, explains that “the origin of this phrase is uncertain. It was used by Theodore Hook in his novel Jack Brag (Paris: W Galignani & Co, 1837) ch 15, and is possibly an adaptation of biblical references to man’s charity becoming cold, see for example, Matthew ch 24, v 12. See further, The Oxford Dictionary of English Proverbs (Oxford: Clarendon Press, 1948).”

“It’s colder than a brass toilet seat in the Yukon.” The Yukon is a territory in the Canadian northwest. It’s cold there. Enough said!

“Cold as blixen” and “cold as blue fujin” are just two examples given by mental_floss, by way of the editors of the Dictionary of American Regional English, of some especially obscure cold similes and phrases.

And if you’re looking for more literary icy similes, here’s a compendium published on Bartlebys, which includes Thomas Hood’s poetic “cold, just like a summer grate”, Shakespeare’s “cold as a dead man’s nose”, and Richard Lovelace’s “cold as the breath of winds that blow/To silver shot descending snow.”

Update on Jan 17, 2016: On Friday morning, during an outside broadcast on a hill in the North York Moors, a popular BBC weather presenter used a “cold as” phrase that we wouldn’t normally expect to hear on the Beeb.  Read the full story here, which includes Ms. Kirkwood’s idiosyncratic description of the temperature, and the BBC’s somewhat surprising determination at the conclusion of their investigation into her unscripted forecast: “We have discovered that on the North York Moors on Friday morning, it was indeed cold as f*ck.”

An excerpt from Herman Melville’s White-Jacket, published in 1850. The book is based on the author’s 14 months of service in the US Navy aboard the frigate USS Neversink.

Chapter 25: THE DOG-DAYS OFF CAPE HORN

Colder and colder; we are drawing nigh to the Cape. Now gregoes,
pea jackets, monkey jackets reefing jackets, storm jackets, oil
jackets, paint jackets, round jackets short jackets, long
jackets, and all manner of jackets, are the order of the day, not
excepting the immortal white jacket, which begins to be sturdily
buttoned up to the throat, and pulled down vigorously at the
skirts, to bring them well over the loins.

But, alas! those skirts were lamentably scanty; and though, with
its quiltings, the jacket was stuffed out about the breasts like
a Christmas turkey, and of a dry cold day kept the wearer warm
enough in that vicinity, yet about the loins it was shorter than
ballet-dancer’s skirts; so that while my chest was in the
temperate zone close adjoining the torrid, my hapless thighs were
in Nova Zembla, hardly an icicle’s toss from the Pole.

Then, again, the repeated soakings and dryings it had undergone,
had by this time made it shrink woefully all over, especially in
the arms, so that the wristbands had gradually crawled up near to
the elbows; and it required an energetic thrust to push the arm
through, in drawing the jacket on.

I endeavoured to amend these misfortunes by sewing a sort of canvas
ruffle round the skirts, by way of a continuation or supplement to
the original work, and by doing the same with the wristbands.

This is the time for oil-skin suits, dread-naughts, tarred
trowsers and overalls, sea-boots, comforters, mittens, woollen
socks, Guernsey frocks, Havre shirts, buffalo-robe shirts, and
moose-skin drawers. Every man’s jacket is his wigwam, and every
man’s hat his caboose.

Perfect license is now permitted to the men respecting their
clothing. Whatever they can rake and scrape together they put
on–swaddling themselves in old sails, and drawing old socks over
their heads for night-caps. This is the time for smiting your
chest with your hand, and talking loud to keep up the circulation.

Colder, and colder, and colder, till at last we spoke a fleet of
icebergs bound North. After that, it was one incessant “_cold
snap_,” that almost snapped off our fingers and toes. Cold! It
was cold as Blue Flujin, where sailors say fire freezes.