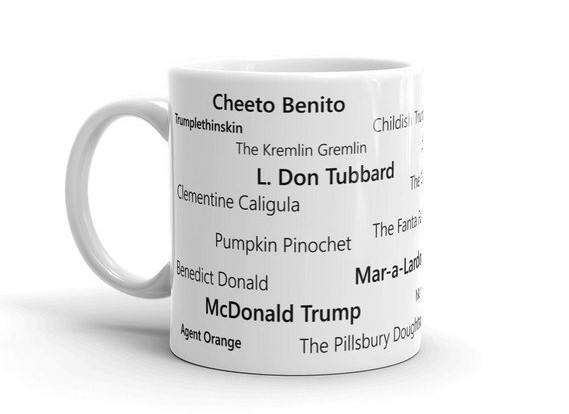 “Rocket Man”, “Lyin’ Ted”, “Crooked Hillary”, “Crazy Bernie”, “Pocahontas”: These are just a few of the many monikers that — having been thrown in the faces of his political rivals and personal nemeses since climbing into his little political sandbox — have earned 45 his only rather dubious oratory honor: that of being President of Nicknames. But, Mr. Don John, it works both ways …

Yesterday, Georgetown professor Michael Eric Dyson, speaking at the funeral of Aretha Franklin, lambasted the “orange apparition” for having the nerve and temerity to claim that the Queen of Soul had once worked for him. “You lugubrious leech, you dopey doppelgänger of deceit and deviance, you lethal liar, you dimwitted dictator, you foolish fascist.” That’s how Mr Dyson addressed POTUS in his eulogy. Here’s an A to Z* of other name-pies — alliterative, uncannily descriptive, and just downright witty — that have been thrown in the face of our reigning Cheese Doodle by celebrated and even distinguished members of the media and public figures of note. Sic and cited.