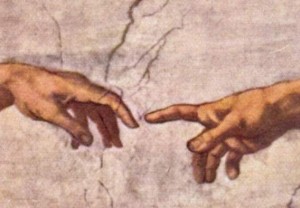 Pull your finger out.

There are various theories about where the phrase originated — including that it was RAF slang, it referred to courting couples, and that it was a nautical saying about crew members loading cannons with powder. Read some of those suggestions in this Guardian notes and queries piece from 2011.