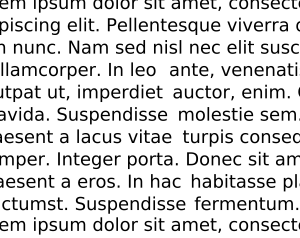 Update, 6 May: the Washington Post has recently weighed in on this decades-long debate. Are you a single-spacer or a doubler?  (The post that follows was originally published in August 2011).

During the process of editing (or “izing”, as we call it at 21C) a recent press release, we were asked by an impressively detail-oriented client to clean up a certain inconsistency in the document: there was a mixture of single spaces and double spaces after the periods (or full-stops, as some of us know them) at the end of sentences. The client had no particular preference for one space or two, but they rightly wanted a choice to be made – a rule to be followed – to maintain consistency.

Who would have thought that the question of this tiny little space – barely wider than a fat ant’s body – would inspire such discussion, disagreement and general excitement amongst my colleagues at 21C? Could it be because our usage of spaces after sentence-ending periods can actually date us? END_OF_DOCUMENT_TOKEN_TO_BE_REPLACED