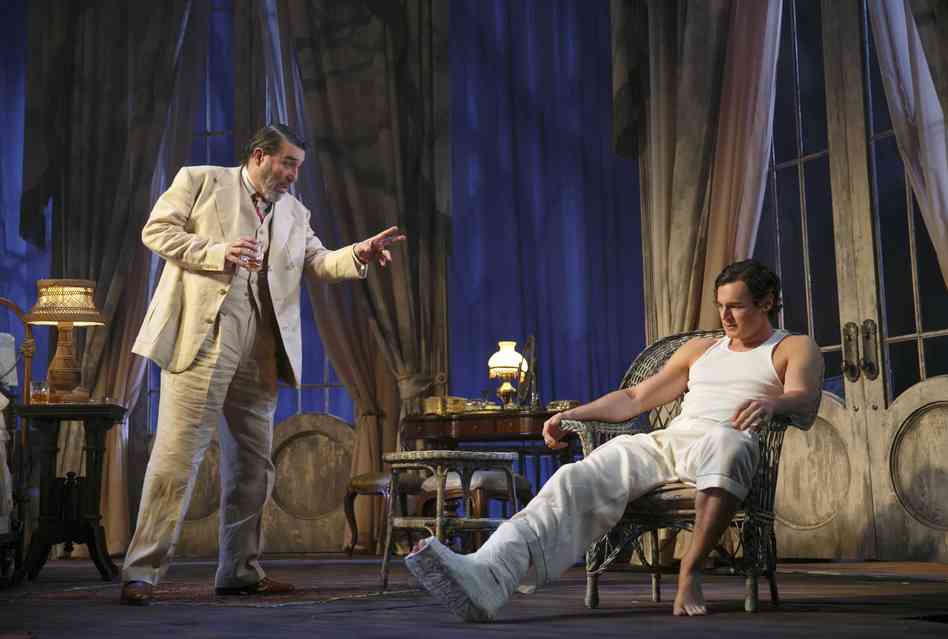 Deceit is like love: it weaves its way into so much of the drama of our lives, and rare is the writer or thinker who doesn’t have something to say about it, whether in truth or fiction, in jest or with indignation. It lay at the heart of two recent dramatic productions I saw — a play on Broadway and an episode of a TV series. (By the way, isn’t it strange that we tend to watch something on TV but we see something on the stage? And similarly, we only ever tell a lie, but we sometimes speak the truth?)

Mendacity is an overt and powerful theme in Tennessee Williams’s Cat on a Hot Tin Roof. Big Daddy and his favored son, Brick, grapple painfully and eloquently with the lies that underpin and darken their relationships — with each other, with their respective wives, with Brick’s late best friend, all against the backdrop of a grand family deceit concerning Big Daddy’s ill health. “There ain’t nothin’ more powerful than the odor of mendacity …You can smell it. It smells like death,”  Big Daddy growls. “Mendacity is a system that we live in. Liquor is one way out an’ death’s the other.”

Back in a different time and place, between the wars in England’s countryside, where aristocrats and their servants tiptoe around each others’ lives, Downton Abbey‘s latest episode sets the scene for a different kind of lie: from an honest, reluctant and principled doctor in the aftermath of a terrible tragedy. Only a brave untruth from him, it seems, can start to repair the relationship between two grieving parents, and the Dowager Countess (played by the magnificent Maggie Smith) is determined to coax that lie from his lips. “‘Lie’ is so unmusical a word,” she argues calmly in the face of his protestations. And so the kind deceit is spoken, to profoundly moving and harmonious effect.

Here is what some of the great writers and philosophers of our time have said about the act and art of lying.

“History is a set of lies agreed upon.” — Napoleon Bonaparte

“Perhaps we have been guilty of some terminological inexactitudes.” — Winston Churchill

“There are three kinds of lies: lies, damn lies, and statistics.” — Benjamin Disraeli

“Lying to ourselves is more deeply ingrained than lying to others.” — Fyodor Dostoevsky

“No man has a good enough memory to be a successful liar.” — Abraham Lincoln

“I’m not upset that you lied to me, I’m upset that from now on I can’t believe you.” — Friedrich Nietzsche

“The visionary lies to himself, the liar only to others.” — Friedrich Nietzsche

“By the time you swear you’re his,
Shivering and sighing.
And he vows his passion is,
Infinite, undying.
Lady make note of this —
One of you is lying.”
— Dorothy Parker

“Falsehood is worse in kings than beggars.” — William Shakespeare, Cymbeline

“How subject we old men are to this vice of lying.” — William Shakespeare, King Henry IV, Part II

“A lie that is half-truth is the darkest of all lies.” — Alfred Tennyson

“Anything is better than lies and deceit!” — Leo Tolstoy, Anna Karenina

“If you tell the truth, you don’t have to remember anything.” — Mark Twain

“The highest perfection of politeness is only a beautiful edifice, built, from the base to the dome, of graceful and gilded forms of charitable and unselfish lying.” — Mark Twain, On the Decay of the Art of Lying

“Lying, the telling of beautiful untrue things, is the proper aim of Art.” — Oscar Wilde

2 thoughts on “The odor of mendacity, the kindness of a lie”