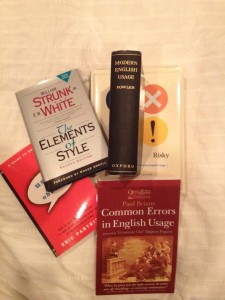 I’m a big fan of these books about English usage and grammar. And I’m in good company: each book has enjoyed its own celebrity or high-profile endorsements — some surprising, and some surprisingly witty, given the subject matter of the texts. But even the best linguists can’t please everyone, and a couple of critics were happy to prove this point too …

“Why must you write intensive here? Intense is the right word. You should read Fowler’s Modern English Usage on the use of the two words.'” — Winston Churchill, in a letter to the Director of Military Intelligence about the plans for the invasion of Normandy

“Reading Fowler provides instruction and knowledge and direction, but the whole of it is a sensual delight.” — William F. Buckley

“[Fowler] has afforded me endless amusement and instruction through my very long life.” — Jessica Mitford

Strunk and White: The Elements of Style

“If someone wants to toss it in the box with me when I go six feet under, that would be fine; it might actually assure my passage through the Pearly Gates, since Saint Peter no doubt is a gentleman of impeccable grammatical taste, not to mention style.” — Jonathan Yardley, Washington Post‘s book critic

“An aging zombie of a book . . . a hodgepodge, its now-antiquated pet peeves jostling for space with 1970s taboos and 1990s computer advice.” — Boston Globe, reviewing The Elements of Style Illustrated in 2005

Garrison Keillor has called it one of the five most influential books in his library.

“When I was nineteen I traveled by bus to New York with a copy of Roget’s Thesaurus on my lap, educating and delighting myself along the way. Now with Mark Davidson’s wonderful Right, Wrong, and Risky, I long for a similar trip in which to instruct my mind and free my spirit.” — Ray Bradbury

“Of course, I knew how it would appear to other people. ‘At the age of 48, she wrote a book on punctuation.’ If you were to read that thumbnail sketch in a novel, you would know everything you needed to know about this character’s tragic lack of ambition (and ignorance of the book trade).” — Lynne Truss, on writing her own runaway bestseller

“An Englishwoman lecturing Americans on semicolons is a little like an American lecturing the French on sauces. Some of Truss’s departures from punctuation norms are just British laxness.” — Louis Menand, New Yorker

2 thoughts on “The best grammar and English usage books: praise from high places”