Ich sage marmalade, you say jam … (But maybe not for long) 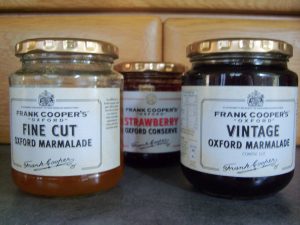 “Brussels MEP plots sweet revenge for Brexit by changing definition of MARMALADE so it includes German jam.” So screamed one of the more bizarre headlines in Tuesday’s Daily Mail. What does marmalade actually mean?

According to the OED, it’s “a preserve made from citrus fruit, especially bitter oranges.”

As the Daily Mail went on to explain, “Under EU rules the spread — a staple of many British breakfast tables and beloved by Paddington Bear — can only be labeled such if it contains at least 20 per cent citrus fruit. … This enshrines in law the British definition that it refers exclusively to spreads made from oranges or lemons. But Germans have traditionally used the name to refer to all sorts of jams made from a variety of fruits including strawberries and plums. … Jakob von Weizsäcker, a German socialist member of the European Parliament, called for the definition to be changed.” You can’t make this stuff up…

Etymonline offers this history of the name of the sweet spread: “late 15c: from Middle French marmelade, from Portuguese marmelada “quince jelly, marmalade,” from marmelo “quince,” by dissimilation from Latin melimelum “sweet apple,” originally “fruit of an apple tree grafted onto quince,” from Greek melimelon, from meli “honey” + melon “apple”. Extended 17c. to “preserve made from citrus fruit.”