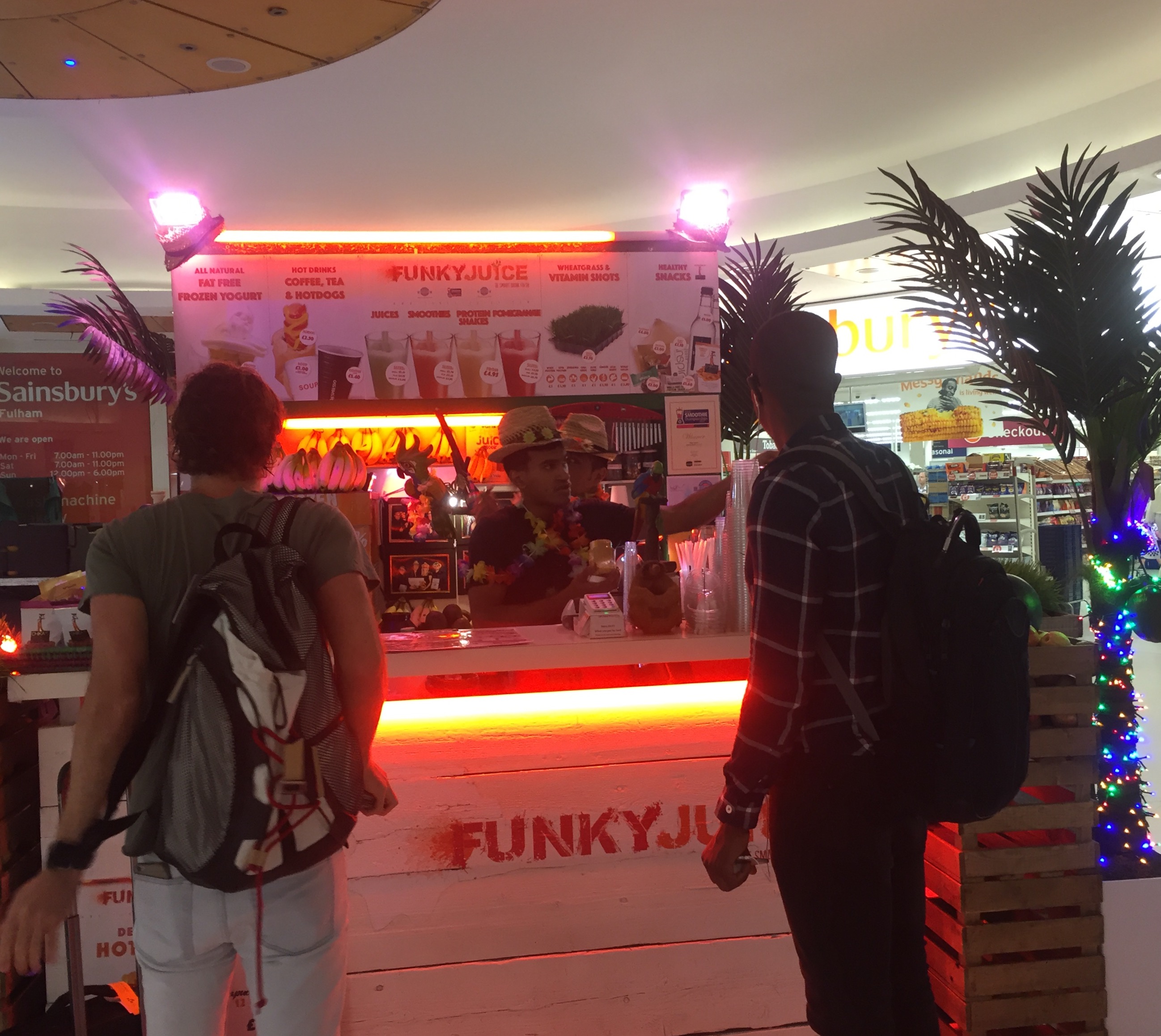 Would you get away with this name for a juice stall in North America?

Passing through Fulham Broadway Shopping center (in London) recently, I was more than a little surprised to see this juice stall pictured above. “Funky Juice.” It was the American in me that was surprised. Smelly fluids? Rhythmic beverages reminiscent of James Brown and George Clinton? A trendy tasty health drink wasn’t exactly what Funky Juices promised in that moment to me.

According to the OED, funky in British English means “modern and stylish in an unconventional or striking way.” Not so in the North American edition of that dictionary: there it means “strongly musty”.

This original funky sense of “smelling strong or bad” dates back to the 18th century, when it first referred to the “old, musty” smell of icky cheeses, based on the noun funk meaning “bad smell”*. It referred to body odors for a while, and as it got more frowsty and stinky it took on the vibe of downright “repulsive.”

But then funky began to smell better. Around the turn of the 20th century, funk turned up in jazz slang, describing a kind of music based on elements of blues and soul with a strong rhythmic thump on the first beat of the bar. Probably getting on down with the funky notion of “earthy, strong, and deeply felt,” the musical funk was born — defined and legitimized in Time magazine half a century later in 1954. And so began its cool journey into the ’60s, when it took on the broader slang meaning of “fine and stylish.” Yeah: funk was cool, whatever side of the Atlantic you were on. But the Americans never quite forgot that bad smell, at least when they weren’t grooving …

Being in a funk — as in either a state of fear or panic (British) or a bad or sad mood (North American) — dates back to 1743** and comes down via the Scots from the Old French word funicle, meaning mad or crazy. Or perhaps, as the OED suggests, it’s from the obsolete Flemish word fonck, meaning disturbance or agitation. But it’s nothing to do with bad smells or musical grooves …

*  funk (n.): “bad smell,” 1620s, probably from the verb funk in the sense “blow smoke upon; stifle with offensive vapor” (though this is not recorded until later 17c.).  perhaps from French dialect funkier ‘blow smoke on’, based on Latin fumus ‘smoke’. (from Etymonline)

** from Now You Know Book of Answers 2 by Doug Lennox