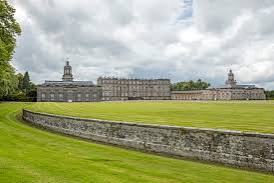 Ha-ha. I’ve just found out the meaning of this old English noun, after reading it in a book written in 1953.

It means “a ditch with a wall on its inner side below ground level, forming a boundary to a park or garden without interrupting the view.”

It comes from an archaic French word dating back to the early 18th century, according to the OED, and is said to be “from the cry of surprise on suddenly encountering such an obstacle.”

It’s attributed to Louis, Grand Dauphin, on encountering a ha-ha in the gardens of the Château de Meudon in about 1700. Walpole also surmised that the name is derived from the response of ordinary folk on encountering a ha-ha, “then deemed so astonishing, that the common people called them Ha! Has! to express their surprise at finding a sudden and unperceived check to their walk.” Thomas Jefferson, after visiting the garden at Stowe in April 1786, also used exclamation marks in his description: “The inclosure is entirely by ha! ha!”