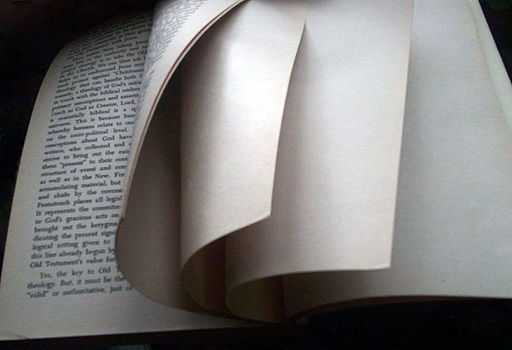 Is overleaf a Britishism? This morning I received a Glosso-related question from Andrea, one of my American friends. “My friend Mary*, who has written several books, uses the word overleaf (which I have come to find out is an adverb) in this sentence: ‘You can see some alternative models of ‘stuck’ overleaf.’ In this sentence, overleaf must describe a verb — like ‘see’. My brain can’t absorb that word as an adverb. It is more like a preposition+noun. Do you have experience with overleaf? Does that sentence sound normal to you?”

Well it does to me — a Brit by birth — but how does it strike the eyes and ears of my fellow Americans? Is this a word only Brits use colloquially or informally? How do Americans normally convey “overleaf” if not using that word?

Both the OED and Oxford Living Dictionaries present overleaf as an adverb (although OED also cites various examples of its rare usage as an adjective), standard in both British- and American-English, meaning “on the other side of the page or leaf.” Below are some examples of its outings since the 18th century.

Do you use it? Please let me know in the comments section below — and don’t forget to note whether you’re British or American.

1742 G. Leoni Palladio’s Archit. “As I have noted over leaf [a1639 ouer the leafe].”
1788 G. Steevens Let. “His dedication (a MS likewise) I will add over-leaf, with all its peculiarities of spelling.”
1843 J. H. Newman Ess. Miracles (note) “Dr. Robinson, as is said over-leaf, cannot escape a bend.”
1893 R. S. Ball Story of Sun  “The picture overleaf exhibits the mare crisium on the Moon.”
1929 W. L. Gadd Great Expectations Country  “However, I give over-leaf a fairly comprehensive list.”
1975 A. Price Our Man in Camelot “Finsterwald’s eye ran on down the page—Continued overleaf.”
2002 Which? “See the table, overleaf, for more detailed information.”

* I’ve changed her name to protect her identity