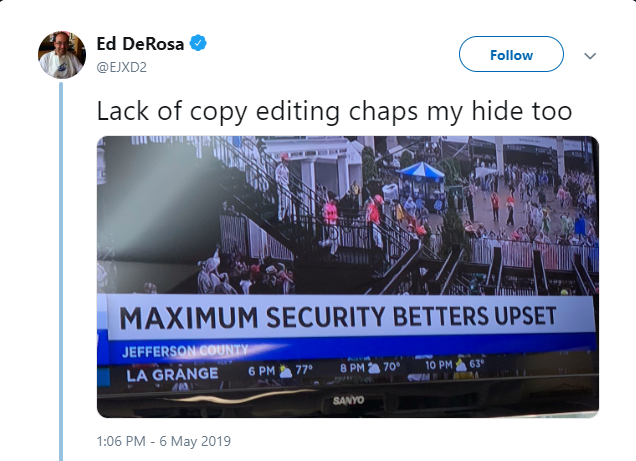 In recent language, spelling and grammar news: bad spelling at the races; a CIA grammatical blunder; how not to teach grammar; a school changes its name from a bad pun; and more …

Spot the mistake in TV coverage of the Derby, picked up by Ed DeRosa on Twitter (see above). Chaps our hides too, Ed.

“Underline a relative clause.” This challenge would give a lot of adults the sweats. It would even—whisper it—flummox many professional writers and editors. … So it is surely proven that this sort of teaching helps young people learn to write. Right? Wrong. Remarkably, nobody knows whether lessons of the “underline the relative clause” type do anything to improve pupils’ prose.” The Economist investigates.

“Turns Out We’ve All Been Pronouncing ‘Marriott’ Wrong This Whole Time.” That’s according to Travel & Leisure …

The CIA is looking for new hires, especially those who speak Russian. With that goal in mind, they put recruitment posters, including one written in Russian, in Washington subway stations. The Russian-language advertisement informed people – and potential recruits – that their language abilities are crucial to the security of the United States. … As it turned out, the recruitment poster had a grammatical error.” Read the BBC’s report.

A US school named Haight after a governor who espoused racist views is changing its name to Love Elementary. The BBC has the story.

“It is this family tragedy that serves as the focus of the Canadian film Edge of the Knife, or Sgaawaau K’uuna. The story, steeped in the supernatural, centres on the universal themes of family, love, loss and betrayal. What is less universal is the language of the film, Haida. According to the First People’s Culture Council, there are only 20 remaining fluent speakers of this language, making it critically endangered.” Read more about the movie and the language at the BBC.

Thanks, Pia, for the Derby tip-off.