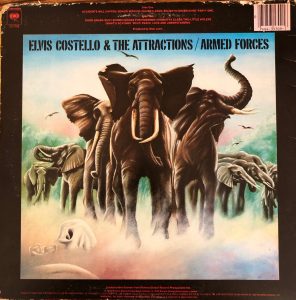 Elvis Costello’s lyrics are sometimes exquisite. I’ve been listening to them for years, since I was a teenager. But it was only this morning, sitting in Riverside Park and listening to my iPod, that I realized for the first time something curious about the chorus of one of his songs: that he uses the same collective noun with two different verb forms, one after the other:

Unlike Americans, who tend to use verbs only in the singular form when the subject is a collective noun (“the crowd is screaming loudly”), Brits use collective nouns followed by either singular or plural verb forms, depending on the context. It’s a matter of emphasis and importance: whether the group is acting as a whole or whether the group’s individual members are important to the meaning of the sentence determines how it is formed. “The student class are causing unease in the school, given the range of learning differences amongst the scholars,” versus, “the student class is the most successful in the school’s history”. However, as a rule*, in both England and America, national sports teams are always treated as a plural noun: “England are beating all the odds and scoring their way to victory.”

So, given Costello’s use of two simple words, perhaps he’s conveying two disarming messages. “Oliver’s army is here to stay”: the army of his imagination (representing “a vision of mercenary and imperial armies around the world”) has no internal doubts or conflicts about its purpose, and it has no intention of leaving or disbanding. But as the lyrics’ author observed when asked about writing his song, ‘they always get a working class boy to do the killing’. “Oliver’s army are on their way”: The army is made up of many young souls, all of whom are marching into battle …

The song’s verses are worth reading, to get a sense of Costello’s brilliance not just as a musician but as a lyricist and poet.

* with some notable exceptions 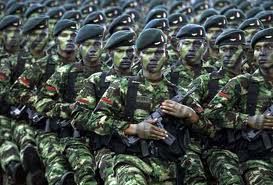 6 thoughts on “Oliver’s army is on its way”