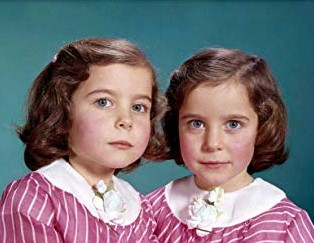 There’s a new novel out, published earlier this month, that will probably appeal to glossophiles (and Glosso-philes) everywhere. Describing itself, as books can do proverbially these days, the novel by best-selling author Cathleen Schine “celebrates the beauty, mischief, and occasional treachery of language.”

“The Grammarians,” as explained in the book’s publicity materials, “are Laurel and Daphne Wolfe, identical, inseparable redheaded twins who share an obsession with words. They speak a secret “twin” tongue of their own as toddlers; as adults making their way in 1980s Manhattan, their verbal infatuation continues, but this love, which has always bound them together, begins instead to push them apart. Daphne, copy editor and grammar columnist, devotes herself to preserving the dignity and elegance of Standard English. Laurel, who gives up teaching kindergarten to write poetry, is drawn, instead, to the polymorphous, chameleon nature of the written and spoken word. Their fraying twinship finally shreds completely when the sisters go to war, absurdly but passionately, over custody of their most prized family heirloom: Merriam Webster’s New International Dictionary, Second Edition.”

Opening her review of the novel in the New York Times, Susan Dominus makes a kind, perceptive and eloquent observation about language experts, who tend usually to get a bad rap in everyday life. “Grammarians aren’t obvious candidates for any kind of celebrity, and yet, surprisingly often, a select few authorities on the use of English write what turn out to be best-selling books. Their insights have a wide enough appeal: They’re experts in and obsessives about the stuff we all dabble in daily. They tend to be witty, gifted instructors, rapping readers’ knuckles with rulers so attractive the knuckles hardly mind. They tame the unwieldy and soothe with the promise of certainty. A Klonopin habit may go unchecked, our democracy may founder, but at least, a reader might feel, there’s some clarity around the Oxford comma.”