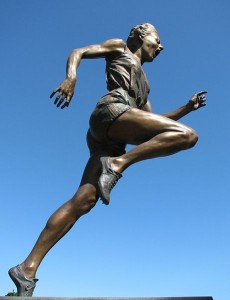 Day 4 of Glosso’s popular evergreen advent calendar, “Baubles of Britishisms”. Each day, leading up to the quintessential British day of rest and relaxation (“Boxing Day”), you’ll open a window to the world of quirky Brit-speak.

To do a runner.

“Paternal intervention can be summarised by Francis’s classic interjection: ‘Oh, Humphrey, do stop being a bore. You’re being a f***ing nuisance. F*** off.’ The only rule, says Edmund, was not being allowed to lose the TV remote. Francis’s childhood was not dissimilar. He recalls that, when his governess appealed for disciplinary aid, ‘There’d be a pause, then the front door would slam as Dad did a runner.'” — Radio Times, 28 Oct 2104

“Carla told him the police were on their way and confirmed she had told the police he had confessed to murdering Tina. ‘You betrayed me. I begged you for another chance!’ Rob wailed. ‘And I really wanted to give it to you,’ insisted Carla. ‘No matter what happens, you’ll always be my brother.’ Biologically, this was hard to argue with. Rob did the only sensible thing left open to him – he did a runner.” — a Coronation Street plot summary in the Daily Mail, 31 Oct 2014

To leave hastily, especially to avoid paying for something or to escape from a difficult place or situation. To get the hell out of dodge.