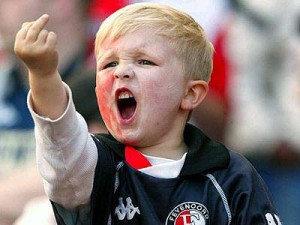 Day 5 of Glosso’s popular evergreen advent calendar, “Baubles of Britishisms”. Each day, leading up to the quintessential British day of rest and relaxation (“Boxing Day”), you’ll open a window to the world of quirky Brit-speak.

“Poking fun at Mujuru, the state press have run headlines such as “On your bike ma’am” and “Mujuru to learn of her fate” suggesting her time in power is up.” — Johannesburg’s Daily Vox, 23 Oct 2014

Sod off! “Above all, these self-pitying, hard done by right wingers fail to understand the history of how human interaction takes place, namely: one person says an idea – then another person responds with another idea. That’s democracy boys. If you don’t like it Ukipers – go and live somewhere else. This is England. This is Britain. If you don’t like our values then you should sod off somewhere else.” — Lee Kern, Huffington Post UK, 31 Oct 2014

Naff off! “For me, the most painful aspect of this fiesta of spiteful innuendo has been to hear this smart graduate in English and drama defend herself with new-agey guff about “growing as a creative person and finally growing into myself”. Bridget might have managed a crisper ‘Naff off‘.” — The Independent, on Renee Zellweger’s plastic surgery, 24 Oct 2014