Martin Luther King Jr. Day is a federal holiday in the US, marking the birthday of the American Baptist minister and activist who became the most visible spokesperson and leader in the civil rights movement. King is known for advancing civil rights through nonviolence and civil disobedience; he is also remembered for his eloquent words of truth and wisdom. Here are some of them.

END_OF_DOCUMENT_TOKEN_TO_BE_REPLACED 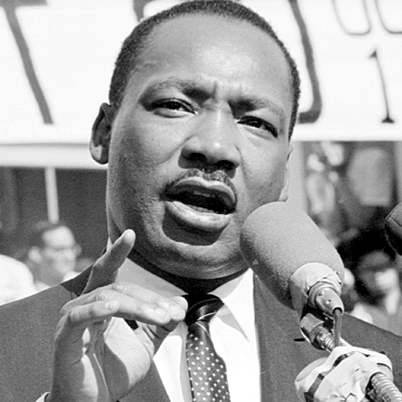 On September 12, 1962, Martin Luther King, Jr. gave a speech at the Park-Sheraton Hotel in New York City to commemorate the centennial of the Preliminary Emancipation Proclamation. It was thought that the only record of the speech was a typewritten script annotated by an audio engineer, but 41 years later — in November 2013 — an intern at the New York State Museum in Albany uncovered the only known recording, which can be heard here.

Some other words of the great civil rights leader whose birth we commemorate today follow below.