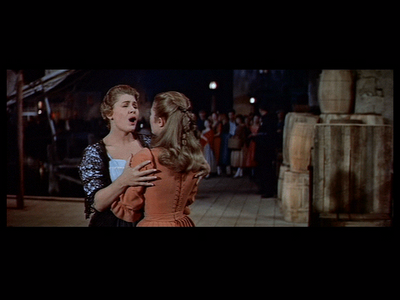 When you walk through a storm hold your head up high / And don’t be afraid of the dark / At the end of a storm is a golden sky / And the sweet silver song of a lark
Walk on through the wind / Walk on through the rain / Though your dreams be tossed and blown
Walk on, walk on with a hope in your heart / And you’ll never walk alone

Before you walk on, go to iTunes and listen to track 17 of Joseph Calleja’s gorgeous new album, Be My Love: a Tribute to Mario Lanza (released a couple of days ago). Listen carefully to the words. http://itunes.apple.com/us/album/be-my-love-tribute-to-mario/id568147992

Did anything surprise you? In glorious voice, the Maltese tenor sings “You’ll Never Walk Alone”, arguably Rodgers and Hammerstein’s most famous song, which they wrote for their 1945 musical, Carousel. Julie, the heroine of the story, has bid a heartbreaking farewell to the father of her unborn child, after the no-good barker at the local fairground has fallen fatally on his knife during a botched hold-up. Julie’s cousin, Nettie Fowler, sings to her of hope and courage, urging her to forge on through her despair with hope in her heart. It’s one of the great moments of musical theater; if your heart has ever been broken, you’ll know what strength can be drawn from the powerful words and melody, and even the owner of the hardest heart won’t fail to melt a little when he hears this poignant song. As well as being adopted as the anthem of Liverpool, the English football club, thus turning it into a favorite of British sports fans, “You’ll Never Walk Alone” has been widely covered by singers of all genres from the 40s onwards – the soprano Renee Fleming sang it at Obama’s inauguration in 2009 – and it holds a spot in the firmament of great and loved American songs.

But strangely, there’s a mystery surrounding its lyrics – in the first line concerning which part of your body you should hold (or keep) high. As Claramae Turner sang in the 1956 movie version of the musical, “hold your head up high”.  But on the original Broadway cast recording (which presumably reflected the stage lyrics), and in subsequent revivals on the Great White Way, the mezzo advises her grieving cousin to “keep her chin up high”. It’s not clear which version Oscar Hammerstein preferred or intended to be sung. And nowadays you will hear one version sung just as often as the other. (Football fans, led by the Liverpudlians, lift their heads rather than raise their chins.)

On the Rodgers and Hammerstein web site, Bruce Miller of the music department of the College of the Holy Cross in Worcester, Mass. votes musically in favor of the head rather than the chin: “”‘Keep your chin up high’ is, as most singers will affirm, more difficult to sing and project than ‘Hold your head up high.’ The vowels for ‘keep’ and ‘chin’ are more closed than those for ‘hold’ and ‘head’.””

He’s right: just spend a moment saying the phrase “hold your head up high” aloud, and notice how the shape of your mouth stays round and open and doesn’t move a great deal as you articulate the words. Now try doing the same thing with “keep your chin up high”: the oral acrobatics necessary to shift between the first three vowel sounds — closed “ee”, open “or”, closed “i” — while maintaining a steady breath and tone are challenging. Now imagine amping up the decibels and projecting over a pit orchestra to the back of a packed theater. It’s interesting that singers such as Calleja – and many like him and of his caliber – have chosen the more treacherous option.

Putting oral gymnastics aside, let’s look at the meaning and nuance of the phrases in question. I can understand why Hammerstein might have felt conflicted about them. First, just the anatomical parts themselves symbolize different things. Whereas our chins serve little purpose other than to act as head-guards, and we think of them in the mundane context of falls and scrapes and mouth spills, our heads are more ‘meaningful’, being at the center of our being and our sense of self: they house our minds, our senses, our thoughts, and our feelings. The head is undoubtedly more noble and poetic than the chin. And yet the expression “keep your chin up” is perhaps closer in meaning than the alternative to the sentiment that Rodgers & Hammerstein sought to convey in their song. “Hold your head high” (more often used without the “up”) has connotations of  pride and rising above defeat, error, conflict or humiliation.  There’s even a hint of wrong-doing in the head-holder, whereas those encouraged to have more confidence by “keeping their chins up” are perhaps more blameless and facing unlucky or fateful obstacles. And yet the notion of holding your head up high somehow carries more gravity and permanence than keeping your chin up, which seems more trite and fleeting by comparison. Furthermore, neither expression fits well in its true form (“keep your chin up” or “hold your head high”) in the meter and rhyme of the song: Hammerstein clearly had to add a “high” to the chin or an “up” to the head for the line to work musically. Might Hammerstein have battled between the conflicting pulls of gravity, meaning, meter and rhyme?

Below are the versions that the song’s various interpreters have chosen over the years.

Joseph Calleja (on Be My Love): chin