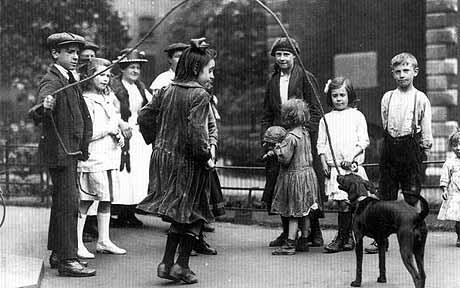 Glossophilia is taking a trip down memory lane with a series of posts on childhood songs and rhymes: when we skipped in the school playground, bounced on our parents’ knees, twisted our tongues around gob-stopping riffs, learned our lessons with nifty mnemonics, and recited —  delighted — silly nonsense.

Remember the days of the old schoolyard? If you’re a grown-up boy, you probably just remember the footie and the fisticuffs more than anything else. But we girls will never forget our hours and hours of hand-clapping and skipping-rope sessions,  the longer the better, with no-one ever tripping the rope or missing a beat, breathlessly counting, and chanting the rhymes and songs — often pretty rude — that gave it all reason, shape and momentum …

Rhyme- and song-based schoolyard games are found in every country and culture — basically anywhere that has a spoken language where children are allowed to play freely. Dating back several centuries, rhyming games serve several purposes — linguistic, social and physical — for the nurturing of young, growing minds:  to explore and develop language, to allow and experience an acceptable form of criticism and rejection, to develop physical coordination, and to teach the social behaviors of turn-taking, rule-setting, cooperation, and playful competition. Rhyming games take several forms, falling roughly into these overlapping categories: circle dances (eg. Ring-a-ring o’ roses/rosie); clapping games (A Sailor Went to Sea Sea Sea); arch or catching or “dipping” games (Oranges and Lemons); selection or counting out games (Ice-cream soda Delaware Punch); and skipping or jump-rope rhymes (Teddy Bear Teddy Bear Turn Around). Childhood rhymes and rhyming games can be traced back to as early as the 17th century in the English language, and like most songs and poetry passed down orally through the generations  — especially those enjoyed by children — the rhymes can be found and remembered in many different national, regional and cultural variations.

Here is a selection of rhymes and games that I remember from my childhood (which was spent variously in England, America, Australia, and the Soviet Union) … 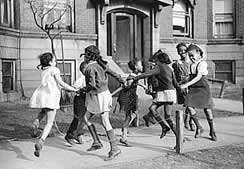 Ring-a-ring o’ roses, A pocket full of posies, A-tishoo! A-tishoo! We all fall down (British)

Ring-a-round a rosie, A pocket full of posies, Ashes! Ashes! We all fall down (American)

Selection and counting games (many of these double up as skipping or jump-rope rhymes): 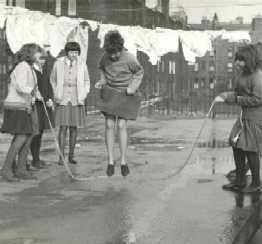 Ip dip sky blue, I’m it not you

Cinderella dressed in yella, went upstairs to see her fella, made a mistake and kissed a snake, how many doctors did it take? 1, 2, 3, 4, 5, etc.

Ice cream soda, Delaware Punch, Tell me the name of my honey-bunch. A, B, C, etc. 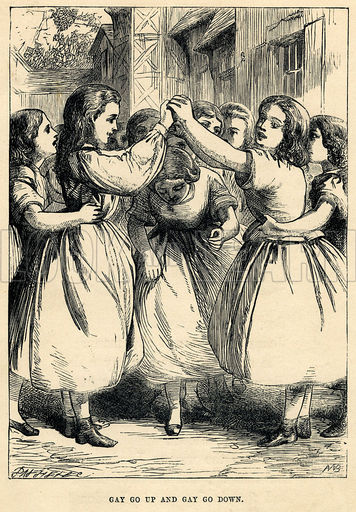 (An alternative – and longer – version begins with the verse: “Gay go up and gay go down, To ring the bells of London town”.)

Under the bram bush
under the tree (boom boom boom)
True love for you my darling
True love for me
And when we’re married, we’ll raise a family
With a girl for you and a boy for me
How’s your father? Sexy!

I went to a Chinese restaurant, to buy a loaf of bread, bread, bread
he wrapped it up in a five pound note and this is what he said, said, said:
My Name is L-I-L-I chickle-li chickle-li,
Pompom beauty, extra cutie

alt:
Elvis Presley, girls are sexy,
Sitting on the back seat drinking Pepsi

Pat-a-cake, pat-a-cake, baker’s man;
Bake me a cake as fast as you can;
Roll it and pat it and mark it with B,
and put it in the oven for Baby and me

Three, six, nine
The goose drank wine
The monkey chewed tobacco
on the telephone line
The line broke
The goose got choked
And they all went to heaven
in a little rowboat

One two three together
up together
down together
back side knees together
Boom!

Ms Mary Mack Mack Mack
all dressed in black black black
with silver buttons buttons buttons
all down her back back back
she asked her mother mother mother
for fifteen cents cents cents
to see the elephants elephants elephants
jump over the fence fence fence
they jumped so high high high
they reached the sky sky sky
and didn’t come back back back
til the forth of july ly ly
july dont walk walk walk
july dont talk talk talk
july dont eat eat eat
down by my feet feet feet.

Miss Susie had a tugboat
The tugboat had a bell
Miss Susie went to heaven
The tugboat went to…
Hello operator
Please Give me number nine
And if you disconnect me
I’ll kick you in the…
Behind the ‘frigerator
There was a piece of glass
Miss Susie fell upon it
And broke her big fat…
Ask me no more questions
Tell me no more lies
The boys are in the bathroom
Zipping up their…
Flies are the meadow
The bees are in the park
The boys and girls are kissing
Way past after dar-ar-ar-ar-ark!

Charlie Chaplin went to France
To teach the ladies how to dance.
First the heel, then the toe,
Then the splits, and around you go!
Salute to the Captain,Bow to the Queen,
And turn your back on the Nazi submarine!

Remember the Days of the Old Schoolyard? by Cat Stevens

11 thoughts on “Songs my childhood taught me 1: Rhymes from the schoolyard”