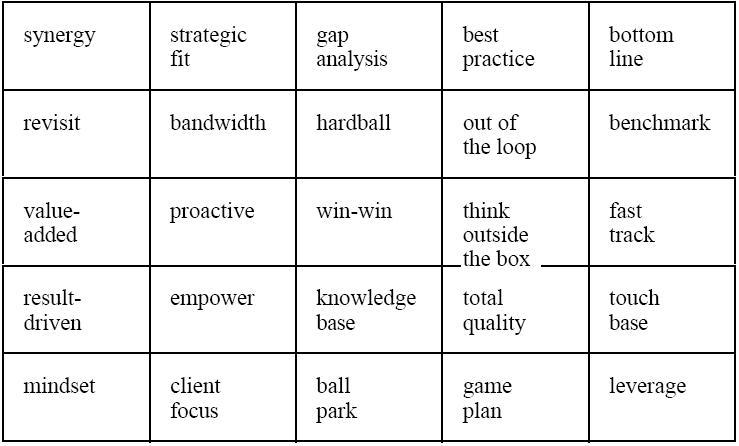 Update, Oct 2018: You can now check your own writing for jargon, using the “Jargon Grader” app. Sic. It really does exist. …

We’re all playing Bullshit Bingo most of the time — in our heads, if not in the board room. When loud cell-phone guy on the morning commute is maximizing symbiotic deliverables, or your colleague’s powerpoint presentation is all about e-enabling mission-critical synergies, the urge to punch a fist in the air and shout “BS Bingo” can be overwhelming. But we all hear and read it and even sometimes speak or write it on a regular basis. Corporate and marketing jargon is here to stay in our daily vocabularies — at least when it comes to the media and the workplace, where formal relationships are negotiated, proposals are pitched, deals are done, speeches are delivered, products and services are advertised, and opinions or beliefs are expressed — often publicly, persuasively, delicately. But why don’t we go home and innovate cross-platform systems or expedite transparent convergences when we snuggle with our sweeties on the sofa?  This relentlessly unattractive terminology seems to be born of and lend itself well to several different possible motives, which often can’t be easily discerned; they include sheer pretentiousness, vain attempts at linguistic or intellectual prowess, deliberate and strategic ambiguity, projections of authority or objectiveness, or simply being fashionable and speaking the lingo of the corporate West.

It isn’t a new phenomenon, this trend of using fashionable words and phrases (often neologisms) that are mild jargon at their best and pretentious bombast at their worst. Back in 1926, Fowler was one of the first to coin the term “vogue word” when he described that which “emerge[s] from obscurity…into sudden popularity”, and although he wasn’t necessarily scornful about these words-of-the-day — as more modern critics tend to be about today’s verbal fads, he identified those that he thought had simpler, clearer and more humble synonyms, such as acid test, asset, distinctly (as in distinctly odd), intensive, mentality, unthinkable, and vision (as in foresight or political concept). Fast forward to the 21st century, and some of our newest vogue words are icon and iconic, interface, meaningful, must-see or must-have, off-message, ongoing, paradigm, parameter, resonate, spin doctor, syndrome, and unravel.

This jargon has stayed largely confined to the workplace, and identifying and making fun of boardroom BS is a perennial sport of many. Last year, playing itself at its own game, Forbes “assembled a cache of expressions to assiduously avoid”. Core competency, empower, scalable, and thinking outside the box were among the worst offenders. In 2011, Huffington Post cited a survey by Career Builder of 5,300 employees who were asked to identify the most overused corporate jargon heard in the boardroom that they would like to see banished. Outside the box was there again, along with loop me in, synergy, low-hanging fruit, incentivize, actionable items, and bandwidth — among many more.

But in recent years this corporate-speak has started to creep into other areas of public discourse — most notably into politics. Soon after this year’s Presidential Inauguration, the BBC published an insightful article asking “Why do politicians use business jargon?”, in which it examined some of the reasons for this spread of cringe-provoking lingo into political and other arenas. “American politicians have been salting their speech with business jargon for some time,” Hank Sheinkopf, a New York-based political adviser, is quoted as saying. “The lexicon of business schools — “outcomes”, “bottom lines” and “results” — has become a way for politicians to appear authoritative and objective.” Read the full article by Sally Davies here.

Visit these two interactive sites if you want to enjoy hours of fun with business bullshit: