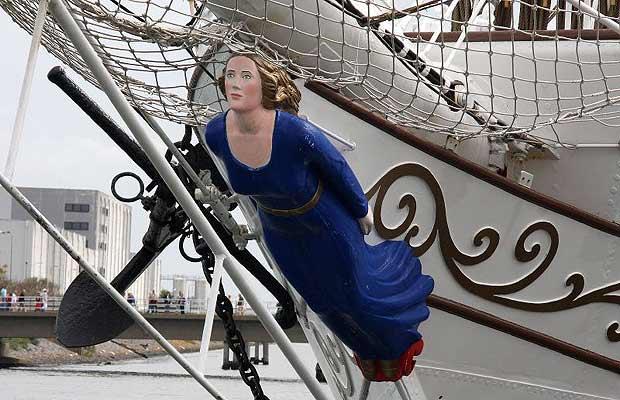 Why are ships called she?

“A ship is called a she because there is always a great deal of bustle around her; there is usually a gang of men about; she has a waist and stays; it takes a lot of paint to keep her good-looking; it is not the initial expense that breaks you, it is the upkeep; she can be all decked out; it takes an experienced man to handle her correctly; and without a man at the helm, she is absolutely uncontrollable. She shows her topsides, hiders her bottom and, when coming into port, always heads for the buoys.”

Based on this prose posted in the wardrooms of most U.S. naval ships and printed on many a tacky tea-towel (take it as mildly cheeky or inexcusably offensive), this is the explanation most people will offer up. (See also the even more chauvinistic rendering by Rear Admiral Francis D. Foley below.)

But seriously: why are ships and countries (and sometimes cars and other vessels and vehicles) often referred to with the feminine pronoun? Although the practice has been in steady decline for some time now, thanks no doubt to feminism and PC journalistic style guides (the Chicago and AP manuals strongly discourage it, and even maritime authorities now frown on its usage), it’s nevertheless been historically ingrained in nautical language and lore for many centuries. One prosaic explanation is that the gender of the Latin word for “ship” — Navis — is feminine. But people generally agree on the more romantic notion of the ‘ship as a she’ phenomenon: that it stems from the tradition of boat-owners, typically and historically male, naming their vessels after significant women in their lives — wives, sweethearts, mothers. Similarly, and more broadly, ships were once dedicated to goddesses, and later also to mortal women of national or historic significance, thereby bestowing a benevolent feminine spirit on the vessels that would carry seafarers across treacherous oceans. Figureheads on the prows of ships were often depictions of such female namesakes, denoting the name of the ship for a largely illiterate maritime population. This practice dated from the early 18th century, before which superstition had it that the presence of women aboard sailing vessels — whether in human or representative form — was an omen of bad luck. The practice of naming boats and ships after women continues today, although certainly not exclusively, as does the habit of feminizing our sailing vessels.

Like ships, but with declining frequency, countries have historically assumed a female form in historical and literary contexts — especially when the author or speaker seeks to personify that country for rhetorical or poetic effect. The New York Times in February 1917 quoted the then editor of The Economist, Hartley Withers, discussing a nation contemplating war: “If America with all her treasure of gold comes into the war against Germany she will be of incalculable help to her allies, regardless of anything she may do as a fighting force. If she stays out, as now, with broken relations with Germany, she will be an equally potent support to us. America’s wealth and financial aid mean everything to the Allies.” National personifications of countries in female forms have been extremely popular over the years, especially in the context of wartime propaganda and patriotism: Brittania, Germania, Mother Russia, Marianne (for France), and Italia Turrita are but a few examples. However, male symbols of nations are not uncommon; John Bull (for the UK) and Uncle Sam (representing the U.S. government) are two notable exceptions to the female country rule. To personify a country in the female form, both linguistically and symbolically, is now something of an anachronism. But despite our gender-blind naming of diseases, hurricanes, storms and other forces of nature, we still bestow on our planetary home and the very core of our existence names of the ultimate symbols of life-giving femininity: Mother Earth and Mother Nature.

“Ships are referred to as ‘she’ because men love them, but this encompasses far more than just that. Man-o’-war or merchantman, there can be a great deal of bustle about her as well as a gang of men on deck, particularly if she is slim-waisted, well-stacked, and has an inviting superstructure. It is not so much her initial cost as it is her upkeep that makes you wonder where you founder.

She is greatly admired when freshly painted and all decked out to emphasize her cardinal points. If an aircraft carrier, she will look in a mirror when about to be arrested, and will wave you off if she feels you are sinking too low or a little too high, day or night. She will not hangar around with duds, but will light you off and launch you into the wild blue yonder when you muster a full head of steam.

“Even a submarine reveals her topsides returning to port, heads straight for the buoys, knows her pier, and gets her breast-lines out promptly if she is single-screwed. On departure, no ship leaves port asleep, she always leaves a wake. She may not mind her helm or answer to the old man when the going gets rough, and can be expected to kick up her heels on a family squall.

“A ship costs a lot to dress, sometimes blows a bit of smoke, and requires periodic overhauls to extend her useful life. Some have a cute fantail, others are heavy in the stern, but all have double-bottoms which demand attention. When meeting head-on, sound a recognition signal; whistle. If she does not answer up, come about and start laying alongside, but watch to see if her ship is slowing . . . perhaps her slip is showing? Then proceed with caution until danger of collision is over and you can fathom how much latitude she will allow.

“If she does not remain on an even keel, let things ride, feel your way, and do not cross the line until you determine ‘weather’ the “do” point is right for a prolonged blast. Get the feel of the helm, stay on the right “tact”, keep her so, and she will pay off handsomely. If she is in the roaring forties, however, you may be in the dangerous semi-circle, so do not expect much “luff,” especially under bare poles.

“She may think you are not under command or control and shove off. If she edges aweigh, keep her steady as she goes, but do not sink into the doldrums. Just remember that ‘to furnish a ship requires much trouble, but to furnish a woman the cost is double!’

“To the women who now help us “man” our ships, my apologies for the foregoing. Only the opening phrase presents my true feelings. After all, a ship’s bell(e) will always remain her most prized possession, and every good ship has a heart, just like yours. A trick at the wheel, like you, would have been welcome aboard when I was on “she” duty for 40 years. May God bless you all, sweetheart!”