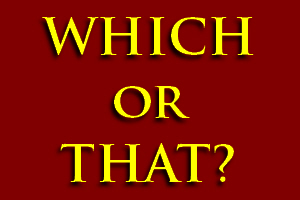 I stumbled on something interesting in the Oxford English Dictionary. It contradicts itself on the subject of which and that, using the relative pronoun which in a definition for which it (the OED) — in its own definitions of which and that — prescribes that. This seems to be symptomatic of a larger ongoing debate about the two relative pronouns that divides not just individual grammar commentators (both lay and professional) but also, apparently, two nations.

First, here’s a brief primer on the original (but now sometimes disputed or diluted) difference between which and that. According to the dictionary mentioned above — specifically the New Shorter Oxford English Dictionary (the 1993 edition): which (when used as a relative pronoun) is defined as “introducing a clause describing or stating something additional about the antecedent, the sense of the main clause being complete without the relative clause.” The same dictionary gives the relative pronoun that a different role in the sentence, “introducing a clause defining or restricting the antecedent, especially a clause essential to the identification of the antecedent (and thus completing its sense).”

An earlier Glossophilia post explains and illustrates this difference a little more simply: “‘That’ … qualifies or identifies the noun preceding it, pinpointing which one of two or more nouns is being referred to. ‘Which’ … simply adds extra but non-identifying information about the preceding noun. A good rule of thumb is this: if the that/which clause can be taken away and you still understand the reference, it must be a which. If you take it away and you’re unsure about what is being referenced, it must be a that.” (See the earlier post for examples.)

Now let’s go to the iffy definition in question: here is the noun prequel defined by the NSOED quoted above:

“A book, film, etc., portraying events which precede those of an existing work.”

According to its own definition of which, the “which clause” presented here about prequel (“which precede those of an existing work”) should be additional to the main clause (“a book, film, etc., portraying events”) and the sense of that main clause should be complete without it. So, technically, “a book, film, etc., portraying events” should stand alone as a complete and understandable clause in its own right. Hmmm … I don’t think so. That second clause is absolutely necessary to complete the definition, and therefore should be started by the word that, which (according to the OED, as noted above) introduces a clause “essential to the identification of the antecedent (and thus completing its sense)”. The definition should therefore read: “A book, film, etc., portraying events that precede those of an existing work.” At least that’s as prescribed by the historical/original respective uses of which and that, which have in the last century become rather murky — especially on the eastern side of the Atlantic.

I have noticed especially in recent years that the British (but not the Americans — at least not to the same extent) have shown a tendency to substitute that with which, as the OED has done in the prequel definition above. And almost as if to justify the switch (or what some might regard as the error),  they remove the comma that normally precedes which in its traditional role as a  non-identifying pronoun. Curiously it’s never done the other way around: ie. that is never used instead of which. Let’s look at the following examples:

“I gave him the coat that suited him best.”  The that clause is defining (ie. it is identifying the coat in question), so the clause is essential for the sentence to make sense; without the that clause, it wouldn’t be clear which coat is being referred to.

This interchangeability or substitution is heard much less frequently on American shores, where that and which tend to retain their traditional respective identifying and non-identifying roles.

My father, Brian Barder (a staunch Brit linguistically as well as in other ways), argues that both Robert Burchfield and Roger Fowler, two of the world’s most respected authorities on language usage, were tolerant of and relaxed about what and that being interchangeable, with both of them noting that some of the best writers tend to disregard any historical difference between the relative pronouns. Here is what Barder explains:

“Burchfield/Fowler (MEU 3rd ed.) in section 3 of the that entry says that most of the time which and that are interchangeable without any “offence to any rule of syntax”, and quotes the original Fowler as ‘wisely’ observing in 1926 that  ‘if writers would agree to regard that as the defining relative pronoun and which as the non-defining, there would be much gain in lucidity and in ease.  Some there are who follow this principle now;  but it would be idle to pretend that it is the practice either of most or of the best writers.’

“I am pretty sure that the distinction has been much further eroded since 1926.

“Burchfield continues with a longish piece about additional complications when either relative pronoun is preceded by a comma, the fact that that can’t idiomatically be preceded by a preposition whereas which can, that that has no possessive form (unlike which), circs in which that is leading a defining clause can often be omitted and understood, but not when it leads a non-defining clause …  and more.  It’s on p 774 of my edition.”

But I think it’s safe to argue that Americans are just different from the British on this particular issue of tolerance and acceptability. Curiously, in this case it’s the Americans who are being the traditionalists — when it’s so often the other way round. It’s also a clear indication to me that I’ve truly joined the ranks of the Americans, at least on this one usage issue.