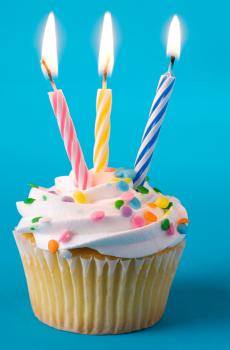 Today is Glossophilia’s third birthday, and to celebrate, we’re taking a gander at the “rule of three” and its important place in the worlds of writing and storytelling. (Here’s a funny little fact: this is Glossophilia’s 333rd post. And thank you to those who come here often and who keep me supplied with tips and ideas: keep ’em coming!)

The rule of three principle states that anything offered in a package of three is inherently funnier, more satisfying, more memorable, more intuitive, or more effective than something that comes in twos, fours or some other number. There’s a Latin phrase, “omne trium perfectum”, that means, literally, “everything that comes in threes is perfect.” And so it often is when it comes to creative writing and prose: we see it in storytelling, comedy, speech-writing and advertising slogans.

What is the magic of three?

First, there’s what we might call “triple cereal magic”: “Snap! Crackle! Pop!”. Three is the smallest number needed to create a pattern, and the human mind processes and retains information most nimbly through pattern recognition. So any phrase or narrative with three connected events or components is going to be a “sticky idea” — to borrow Gladwell’s sticky terminology. It comes as no surprise that some of the most famous advertising slogans of all time consist of just three words:  “Just do it” —  “Vorsprung durch technik” — “Beanz Meanz Heinz” — “Your flexible friend” — “Finger lickin’ good” — “Every little helps” — “Diamonds are forever” — “Taste the difference” — “Real. Comfortable. Jeans”. Ask any speech-writer or political campaign manager what makes a really good phrase or slogan, and they’ll give you trebling (another term for the rule of three). “Liberté, Égalité, Fraternité” (says France), “Go, fight, win!” (say the cheerleaders), “Yes we can!” (promised Obama), “Location location location” (chant the real estate agents), “Education education education” (said Tony Blair).

Second, there’s what we can call “triple serial magic” — that of the narrative three. In storytelling, two similar and connected events that promise a third can create a sense of tension and anticipation. Take the fairy-tales The Three Little Pigs, Goldilocks and the Three Bears, or Rumpelstiltskin. The protagonist in each of these stories faces a challenge or an obstacle: the first and second events introduce and reinforce the problem respectively and set up a pattern that begs a resolution; the third event is often climactic and represents an epiphany or a transformation — as experienced by Scrooge in Dickens’s novel A Christmas Carol after three visits from his ghosts. In so many folk tales, the third of three siblings succeeds where the older or younger two have failed. And there’s always some poor sod who fails two tests but then succeeds on the third attempt through trickery or fortune.

And third, still on the theme of a narrative in threes, there’s the “cereal killer”: the third event that jumps out when you’re least expecting it, bringing with it a twist of horror, absurdity or humor. It’s what often makes the best stories, and the best jokes. The “comic triple” is at the heart of so much humor: it’s a standard tool of comedians in setting up their perfect punch-lines: hence the common joke format “An X, a Y and a Z walk into a bar …”

The rule of three in writing can be seen as part of a wider cultural or psychological phenomenon that recognizes three as a tidy, digestible, ‘gettable’ number that works in so many contexts and formats. In visual art, there’s a “rule of thirds” (see Wikipedia for an explanation); in maths, science and religion, concepts often come in or break down to three components. According to the Grove Dictionary of Music and Musicians, sonata form — which consists of an exposition, a development and a recapitulation — is “the most important principle of musical form, or formal type, from the Classical period well into the 20th century”. Films, books and plays — while usually having a beginning, middle and end — often come in trilogies. Syd Field, an American screenwriting guru who wrote several books on his craft, articulated his ideal screenwriting paradigm as the “three-act structure”. Adjectives in threes add just the right amount of emphasis, and as we saw above in public-speaking, three repeated words are sticky and memorable. Rhetorical phrases so often come in threes: “Ready, aim, fire!”, “Veni, Vidi, Vici”, “Lights, camera, action”, “Reading, writing, arithmetic,” “the truth, the whole truth, and nothing but the truth”. And when have you ever heard someone starting something — anything — on the count of five?

An Englishman, an Irishman and a Scotsman are being chased by a policeman. They see an old warehouse and run inside, where they find three empty sacks on the floor. They each jump into a sack. In comes the copper and he sees these three bundles on the floor. He goes up to the first one and kicks it. The Englishman shouts out, “Woof Woof”, and the copper leaves it alone, thinking it’s just an old dog. He goes to kick the second sack. “Meow, meow,” the Scotsman yells out, so the cop leaves this one too, thinking its just an old cat. He walks over to the last sack and kicks it, and the Irishman yells out “Potatoes! Potatoes!” (Joke courtesy St-Patricks-Day.com)