It’s probably a cultural thing. With our need to please everyone and to offend no-one (at least not overtly or publicly), not to assume anything nor to presume – God forbid – any sort of familiarity or intimacy, to clarify, to tiptoe around the subject, and to mind our Ps and Qs, we Brits love to pile on the words. Mainly little ones. Our colleagues across the ocean are all about being direct: what you hear is what you get.

“Please, if you would be so kind, would it be possible to have a sandwich with some pastrami and some rye bread, if that’s OK? Thank you,” whispers the red-faced Englishman in the queue at the deli counter.

“Gimme a pastrami on rye!” yells the Yank.

In most examples of usage differences, it’s the Brits who add the extra words:  an article here, a pronoun there, a qualifier, a conjunction, a polite plea — oh just anything to soften the brutality of that bare utterance.

Americans are known to look after their mouths more carefully than do their counterparts across the Atlantic, so perhaps it’s in the spirit of lingual thriftiness that they’re always on the look-out for an opportunity to save a syllable. “The exhibit opens April 15,” they say, shortening the exhibition to one of its components, taking out the “on”, and skipping all the laborious date embellishments that Brits prefer to add (“it actually opens on the 16th of April”). “That’s two hundred fifty-three bucks!”, they exclaim, while we surreptitiously slide a conjunction in between the numbers. “Enjoy!” they command, removing the object of anticipated pleasure – or its pronoun. “Write me” doesn’t mean you have to spell out a two-letter word.  “He took it in stride” leaves no Yank guessing: “Whose stride”? Hell, they even save a whole syllable by removing that tiny “i” from the name of our planet’s most abundant metal … (But don’t let’s get started on letter-dropping here.)

So, why then is every American willing to expend that extra ounce of oral energy when they refer to themselves receiving (but not dispensing) treatment in their temples of healing? Along with the Brits — who admittedly have to venture a little outside their comfort zones in these instances, Yanks are usually content with article-less descriptions of their locations, deployments or confinements when they’re “at sea”, “in jail” or “at school”. But the moment an American becomes a patient, she is in THE hospital” (unlike her British counterpart who’s as happy in hospital as she is in prison).

Both their attending physicians need a definite article where they work, though. Just to avoid any confusion. 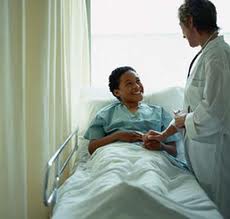