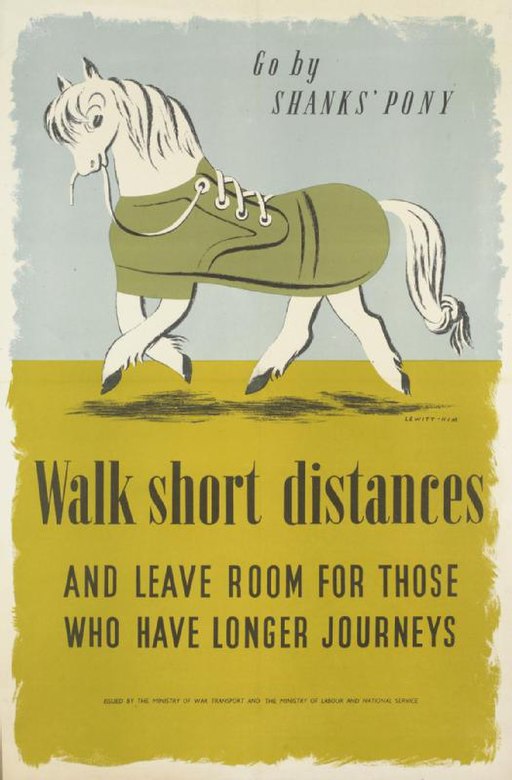 Are you familiar with the phrase “going by Shanks’ pony” — and do you know where it originates? If you’re American you might know it as Shanks’ mare …

As Oxford English Dictionary explains, “Shanks’ (or Shanks’s) mare, pony, etc.: one’s own legs as a means of conveyance.” The shank is defined as “the lower part of the foreleg of some animals, spec. of a horse, that part between the so-called knee and the fetlock, corresponding to the metacarpus. Also, the tarsus of a bird; the tibia or fourth joint of the leg of an insect.” The expression dates from Scotland in the 18th century: see OED‘s early citations listed below. Once it crossed the Atlantic, the term became ‘shank’s mare’, which remains the common form in America today.

The poster illustrated above — designed by Jan Lewitt and George Him, of the Lewitt-Him Studio, — was issued by the Ministry of War Transport and the Ministry of Labour and National Service during the Second World War, in about 1943. As the National Archives explains: “Petrol rationing, low car ownership, heavy use of the railways to move troops as well as the blackout all conspired to fill public transport to bursting during the Second World War. Rail passenger journeys topped 1.3 billion in 1945. The Lewitt-Him partnership’s poster for the Ministry of Transport (with a relatively modern-seeming message for the carbon conscious 21st century) encouraged walking where possible in an attempt to thin out packed trains and buses.”

Hat-tip to Owen for bringing this expression to my attention.