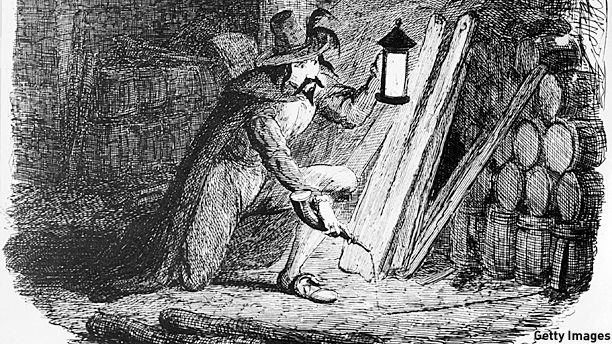 It’s Guy Fawkes Day, and here’s the rhyme we all know (followed by two of its predecessors). Remember remember!

Guy Fawkes, guy, t’was his intent
To blow up king and parliament.
Three score barrels were laid below
To prove old England’s overthrow.

And what shall we do with him?
Burn him!

The earliest recorded rhyme, from 1742, is reproduced below, followed by the one bearing similarities to most Guy Fawkes Night ditties, from 1903.

Don’t you Remember,
The Fifth of November,
‘Twas Gunpowder Treason Day,
I let off my gun,
And made’em all run.
And Stole all their Bonfire away.

The fifth of November, since I can remember,
Was Guy Faux, Poke him in the eye,
Shove him up the chimney-pot, and there let him die.
A stick and a stake, for King George’s sake,
If you don’t give me one, I’ll take two,
The better for me, and the worse for you,
Ricket-a-racket your hedges shall go.

(Recorded at Charlton on Otmoor in 1903)

Hat tip to Julian for posting this on Facebook. And dedicated to my daughter Lily, who was born on the fifth of November.