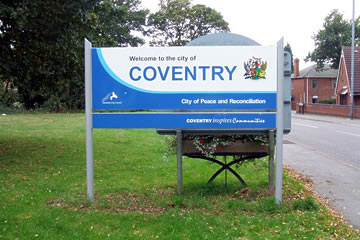 Day 6 of Glosso’s popular evergreen advent calendar, “Baubles of Britishisms”. Each day, leading up to the quintessential British day of rest and relaxation (“Boxing Day”), you’ll open a window to the world of quirky Brit-speak.

To send someone to Coventry.

“He also had to learn to stop saying things like ‘barth’ instead of ‘bath’. “There’s no bloody R in it, yer poncy bugger,” her dad would say. I’ve since looked it up, and he was right. It’s just one giant melting pot round by us now, and nobody bats an eyeball these days if you say you’re going out with somebody from Small Heath. But in those days it was voodoo, and anybody that broke the rules could face being ostrichised or, worse still, sent to Coventry, which apparently is even further south than Birmingham.” — “Lazy Cow” Doreen tells her story in the Birmingham Mail, 16 Nov 2014

To refuse to associate with or speak to someone: a very British way of ostracizing and ignoring someone. Wikipedia offers an explanation: “The origins of this phrase are unknown, although it is quite probable that events in Coventry in the English Civil War in the 1640s play a part. One hypothesis as to its origin is based upon The History of the Rebellion and Civil Wars in England, by Edward Hyde, 1st Earl of Clarendon. In this work, Hyde recounts how Royalist troops that were captured in Birmingham were taken as prisoners to Coventry, which was a Parliamentarian stronghold. These troops were often not received warmly by the locals.”