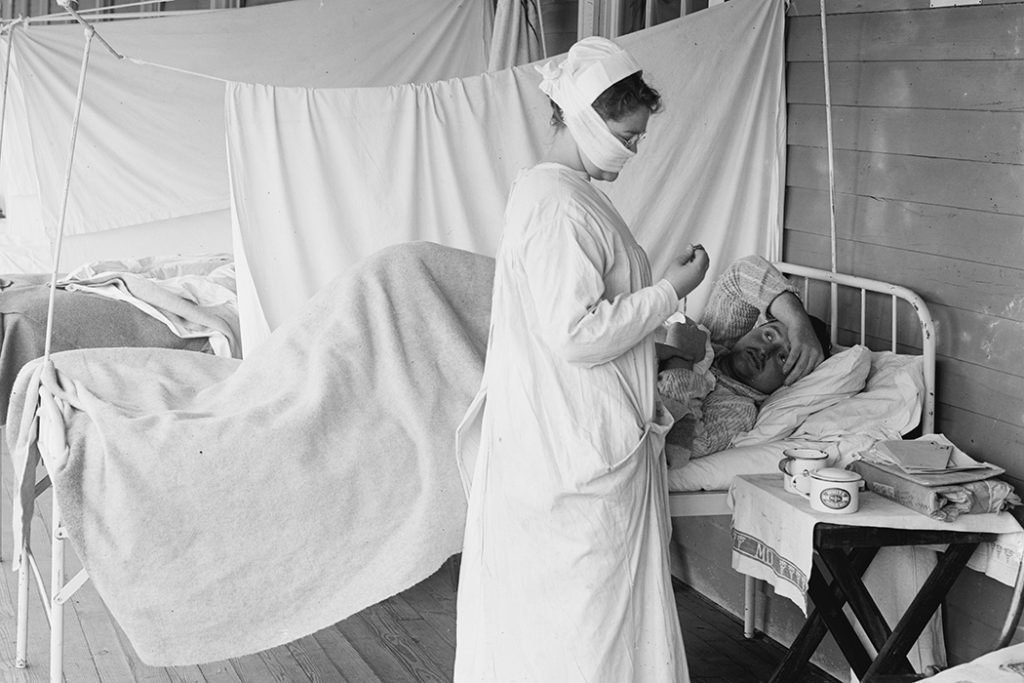 Influenza, labeled Spanish, came and beat me to my knees;
even doctors couldn’t banish from my form that punk disease;
for it’s not among the quitters;
vainly doctors pour their bitters into ailing human critters;
they just sneeze and swear and sneeze.

Said my doctor, “I have tackled every sort of ill there is
(I have cured up people shackled) by the gout and rheumatiz;
with the itch and mumps I’ve battled,
in my triumphs have been tattled,
but this ‘flu’ stuff has me rattled,
so I pause to say G. Whiz.”

I am burning, I am freezing, in my little truckle bed;
I am cussing, I am sneezing, with a poultice on my head;
and the doctors and the nurses say the patient growing worse is,
And they hint’ around of hearses, and of folks who should be dead.

Doom has often held the cleaver pretty near my swanlike neck;
I have had the chills and fever till my system was a wreck;
I have had the yaller janders, foot and mouth disease and glanders,
and a plague they brought from Flanders on an old windjammer’s deck.

But this measly influenzy has all other ills outclassed;
it has put me in a frenzy, like a soldier who’s been gassed;
if the villainous inventor this my lodge of pain should enter
I would Use the voice of Stentor till he had been roundly sassed.

May the ‘influenza vanish!
Of all ailments it’s the worst;
but I don’t believe it’s Spanish – haven’t thought so from the first;
on my couch of anguish squirmin’,
I’ve had leisure to determine that the blamed disease is German,
which is why it is accurst.